There is a lot of misunderstanding about what makes the ball do what it does after it has been struck. In fact, some of this comes from the traditional view of the ball flight laws before modern tech like flightscope and trackman really told us what is going on with the club face and path and the effect it has on trajectory. Here is what you need to know to really understand.

Until quite recently, we used to consider that there were 9 basic laws which were essentially 9 basic shot shapes dependent on face angle in relation to the path of the golf club. It worked like this:

If you imagine a right-handed golfer standing at address and hitting the ball, these ball flights basically go from left to right. For example, a Pull hook means the ball heads left off the clubface and hooks further left. This is my go to off the first tee when I am under a bit of pressure! The pull heads straight left, the pull slice heads left but slices back to the right/centre and so on all the way to the push slice. This is the beginner’s favourite and sees the ball sailing right and then further right over the trees and out of bounds!

The shot is simply a consequence of the angle of the face to the path. These nine ball flights were considered a result of combining three possible paths (in to out, straight, out to in) with three clubface positions (closed, square, open)

This was the matrix of possible results (for a right-handed golfer):

This looks good and satisfied golfers for decades. However, it doesn’t actually tell the whole story.

The first issue with these nine “laws” is that a three-dimensional dynamic swing model isn’t quite as simple as this traditional model makes out. For example, an out to in swing is a common ‘fault’ among learners of the game. And yet it is also something that some very good golfers look to do deliberately. The difference is both the degree of in to out and also the other vectors involved in the swing such as angle of attack (hitting down). Looking simply at club path with looking at how much and how it relates to the rest of the swing is pointless.

This has only really come to the forefront in recent years through improvement in technology. For example, looking a swing on Foresight or similar will give a huge amount of detailed data, a lot of which is contrary to what the person swinging the club might actually be feeling. The same is true for high speed photography where we can see what the club face is actually doing through the point of impact.

This data tells us that, without being necessarily wrong, the table above is probably not describing the ball flight and club movement as accurately as it should. So what is really going on?

The biggest issue with the nine laws is that they got the role of club path and face back to front. They said that club path dictated the initial direction of the ball and the face would make the ball curve or not. For example, the pull-slice would, according to the 9 laws, because by an out to in swing path and the club face being held open to this path. The ball goes left following the line of the club but slices right (all for a right-handed golfer) because the face is pointing right compared to this line.

In fact, it is the opposite, or at least close to the opposite. The initial direction of the ball is actually at least 75% (and possibly quite a bit more) decided by where the club face is pointing and then the ball will curve based on the path of the club. The other issue is of course that when we say ‘square’ it doesn’t mean anything on its own. Square to what? Square to the line of the club face?

Generally, it is more useful to think about the face being square to a target. To make things easier, let’s consider the target to be straight in front of us and we are trying to hit it straight. If we swing with the club face straight to this target but we swing out to in, what happens?

Well, the ball will start off straight before slicing to the right. Why is this? The initial face position is square to the target and will ‘provide’ the initial direction of the ball (although it won’t stay straight for long!) This ‘square’ club face is actually open to path of the club which is going out to in, causing the ball to curve off to the right.

This relation of face to path will make for the various possible flights. Confused? This video should perhaps give a more visual explanation. 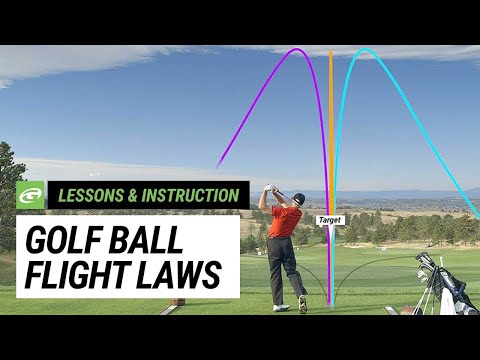 The Key Factors For Ball Flight

Despite the fact that the traditional ball flight ‘rules’ are still taught by some teaching pros, modern science tells us that they aren’t true, or at least not completely. So what should we be concentrating on in order to truly master ball flight? Well, as stated above, we need to know what the face is doing and what the path is doing. Ultimately, the only way to do this is by getting some virtual eyeballs on your swing dynamics, either through trackman or a really in-depth fitting for example.

If you want to understand exactly what is happening, there are more things that should be part of the equation. For example, angle of attack (whether you hit down on the ball and by how much), strike location, spin loft which is (over-simplified) the difference between the angle of attack and the actual loft at point of impact) are all elements which will affect ball flight. Spin loft, for example, as the name indicates will dictate the amount of spin generated.

For example, someone who is a good golfer will play with their hands arriving before the club head and the shaft leaning forward. A six iron with 30 degrees of loft might only be presented with say 20 degrees. If this same golfer has an attack angle of minus five degrees, his spin loft will be 25 degrees, or close to the pga tour average.

Another golfer with the same 30 degree six iron is perhaps more of a flipper. He presents 30 degrees of loft at impact. He has a neutral attack angle of zero and so has a spin loft of 30 degrees. If we add in the fact that the first golfer is swinging at 95 mph and the second at 75 we are going to have some big differences.

Now let’s imagine that these two golfers have the same club face direction relative to target and the same club path. In theory, this would give the same ball flight but the differences in spin loft as well as club head speed are going to make a(big) difference.

So where does this leave us? Well, probably confused for some people and for that, my apologies! Ultimately, there are two key points. The first is that club path and face angle are very important, but not in the way that many golfers still believe. The second point is that there are other factors that come into play too which means that some sort of prediction based on these two factors is, at best, a moot point. The only thing we can say is that it is at the very least an educational experience seeing what you are really doing with an hour or two on trackman and then working on simple swing fixes to control the main factors and manage shot shape and therefore how well we get around the course.