Is Shanking the Worst Shot in Golf?

Most golfers will hit a fat or thin shot or two every round. A lot of us will probably slip a hook or fade in there at some point too. While none of this is good and won’t exactly leave us smiling, rarely does it have the same effect as one other type of shot. This is the one that makes you want to put the clubs away in the attic, or maybe just drop them off at a goodwill store on the way home and look for a squash club to join. There is nothing like shanking for ruining anyone’s day on the course.

I have talked about this before, particularly in relation to shanking wedges. In that article, we looked a few reasons why it could be happening in the short clubs and how to at least try to get rid of them. In this article we’ll be looking at a few of the reasons and solutions, but also just what makes the shank such an unwelcome visitor compared to any of the other myriad of misses that are common on the course.

Shanking: Not Always a Swing Problem

To my mind, there are two really big issues with the shank. Surprisingly, they aren’t really swing issues though. In fact, if you regularly hit a hosel rocket or two, there might not be very much wrong with your swing mechanics at all. The reason for this is actually pretty simple. The shank isn’t generally a swing flaw as such. In fact, as you can see in the video below, it is not that uncommon at the highest levels of the game and there are some picture perfect swings there for sure! 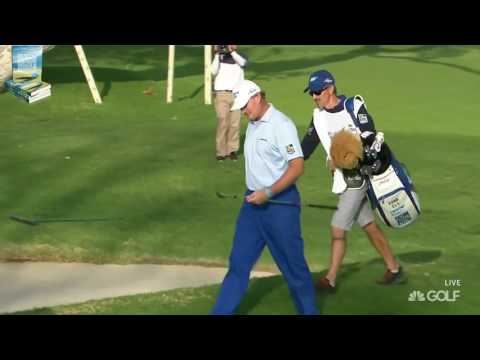 The first problem is that we can’t generally see the shank coming. As an example, when you look at a golfer, often a higher handicapper, who has a big out to in movement across the ball with his driver, you know this is going to be anything from a solid fade to a huger slice into the trees. The physics of the golf swing make this an absolute certainty. The face is very open to the path and the ball can’t do anything except veer off to the right (for a right-handed golfer).

This isn’t the case at all for anyone shanking it. In fact, if you were to look at ten swings without knowing what actually happened to the ball flight, it would be bordering on impossible to know which one or ones lead to a shank. If you watch a televised shank, you will know either through the shot tracer onscreen or because of the player’s reaction.

The Shank: The Ultimate Disaster Shot

The other really big problem with the shank is just how bad the result can be. a fat shot might see you only half as far as you expected but in the same direction. A hook can be painful but you can generally at the very least follow the flight of the ball as it disappears left of left. A shank is a whole different kettle of fish. The ball can head of at basically ninety degrees. This is a tough place to find yourself!

I remember once playing a shortish par four and having something like a gap wedge into the green with no real danger anywhere. I address the ball thinking birdie. 30 seconds later, I am dropping a ball and hitting four after a shank that headed straight right and out of bounds.

This leads us on to the really big problem. The mental block that comes with falling victim to the shanks. In the previous example, stepping up to hit my fourth shot after a shank was extremely complicated. Suddenly, that 100 yard shot into a wide open green was fraught with danger. I was so concerned about another ball heading right that I managed to pull a wedge left into a bunker that was even on my radar the first time around. A shaky bunker shot and a couple of putts later and my potential birdie had become a seven!

This is obviously no way to make a score but the reality is that the practical side of things (score) really isn’t the worst of it. Once you hit a shank, it is there, in your head. It becomes impossible to relax and just hit shots. In my case, I used to spend quite a bit of time playing on the par three course at my home club. Once the shanks set in, this was just impossible. I was terrified of either hitting the group on the hole running parallel to the one I was playing or sending the ball rocketing onto the road by the course. How are you supposed to enjoy the game with this going on?

Can you Really Stop Shanking?

All this brings us on to the reasons why people start shanking and the ways that we can potentially stop it. In fact, the reasons why we shank can be many and varied. Hands too far in front, over-rotation of the wrists, swing path too far inside or outside, clubs too long/short,…..etc In general though, a lot of people who hit a shank are actually very close to hitting it perfectly.

When you think about it, this makes sense. The difference between a ball that comes right out of the sweet spot and one that touches the hosel might only be a centimetre or so. Your horrible right-angled monstrosity that is sending vibrations up your arm could have been a perfect, butter-soft, high-flying pure iron.

This leads us in to one more big issue. Trying to fix the issue can actually make it worse or lead to other problems. Maybe you read on the internet that shanks are caused by standing too close to the ball. You move an inch or two farther away and now the problem has got worse! What you didn(t know, is that for you the real issue was perhaps standing too far away from the ball in the first place!

so far, I haven’t really given anyone either much to work on or even a reason to be optimistic. Don’t worry, all isn’t lost. Firstly, for most golfers, the shank is a passing (unwelcome) guest. It will show up now and again just to keep you humble on the course and then head off like a thief in the night. Who knows why?

The second part here is key though. One of the biggest advantages we have as modern golfers compared to generations gone by, is our access to some high tech solutions. One of the best of these is the ability to analyse swing and clubhead data, especially with slow-motion and high-speed photography. This is the real key to getting rid of the shanks. It can be a revelation to see that your shank is really you leaving the clubhead miles open and spraying it right. Or perhaps you really are too close to the ball and not leaving yourself enough room to get the club lined up at impact.

The point is, the solution is going to be YOUR solution. As much as I often think we are better off just playing the game and worrying less about the minutiae, I think that this is one situation where and hour or tow with a pro and a lot of high tech equipment could really make the shanks, if not a thing of the past, then certainly something that plays far less havoc with your game.