One of my favourite subjects is that of single length irons. I have written about what I perceive to be their advantages and disadvantages as well as things that come from my experience with them. One of the associations people have with single length is the idea of a one-plane golf swing. I understand why this connection exists in the minds of many but I don’t think it actually makes a lot of sense and honestly, I am not even sure that the idea of one plane swings really means what people think either.

One Swing is not One Plane

The confusion, I think, comes from the idea of one swing for all clubs. One of the ‘selling points’ of single length irons is that you can have the same swing and same ball position for all irons. This isn’t necessarily the truth because there is nothing wrong with gripping down, moving ball position or whatever. The ins and outs of single length irons aren’t necessarily within the scope of this article, but it is worth bearing in mind that one length and one-plane are one and the same.

So what does one-plane really mean? Honestly, I just don’t know if it means anything anymore! Let’s start by looking at what people think is happening in the golf swing, more particularly a so-called one-plane swing.

Same Path Up and Back?

The image that people have in their head is that the club simply travels up from the address position into the transition and then back along exactly the same path. I suppose, depending on definition of plane, this might fut the bill. If we think about the clubhead being on the edge of a circle, the idea is that it makes a circle up to the top and then follows exactly the same circle back down to the ball.

This seems quite tempting as an idea. A lovely, simple golf swing which should be extremely repeatable and should make for great ball-striking. Unfortunately, it just isn’t the case, at least not in any golf swing that produces good results. If you look at any high-quality ball-striker, this is pretty clear. Regardless of how they swing the club, they will generally drop the club at the top and come back down on a path that is under that of the back swing.

This is usually when someone says something like ‘they drop under the plane’ but, once again, I don’t think that actually means very much.

Getting back to our better players’s or professionals’ swings, they all undoubtedly do this. You might look at some of the less typical swings out there, someone like Jim Furyk or Mathew Wolff and they certainly have fairly unusual parts to their swing but even they do exactly this at the top. They might get to the transition with a range of loops and twists, but from there on down, it is drop the club into the slot and come at it hard from the inside.

Well what about our friend Bryson Dechambeau for example? surely with his single length, extremely upright clubs he is the epitome of single length. Vertical swing up with every club and the same path back down, right? Not so fast. Take a look at his swing in slow motion in the video below: 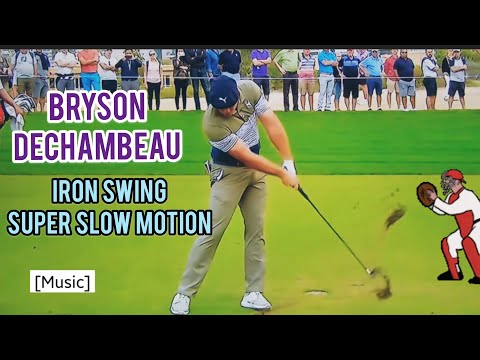 He really doesn’t do this at all. you can see him clearly dropping into the down swing, not following the line of his back swing. If the king of single length, vertical swings isn’t doing this, are you sure it is really a thing?

Let’s just imagine for a moment that it can be done and it is actually a good idea. There is still one really big issue. Look at the video above when Bryson is addressing the ball. Now fast-forward 45 seconds or so and look at his impact position. We know he didn’t follow the same path up and down, but let’s forget about that for a moment. Is that impact position the same as the address position? Clearly not.

Even if we imagine that swinging the club up and down on a single plane is a good thing, it isn’t giving us a proper impact position. Weight at impact is on the front foot, shaft is leaning forward, the leading shoulder is down (not essentially level like at address)…this isn’t simply a return to the start position.

With all that being said, it seems clear that the idea of one plane is basically a myth. At the very best, it describes a swing with limited difference between the circle drawn by the club going back and that drawn on the way down. Even then, these circles definitely won’t sit neatly over one another in any direction.

Time to Forget One Plane Swings?

Surprising as it may seem, I am not rubbishing the idea of one-plane. Firstly, as I have often said, I am not a professional swing coach, simply an interested amateur. Secondly, I think that the idea can be quite useful. It is often said in golf that feel isn’t real and this is one of those cases. Having the feel of one-plane I think can be quite useful. It avoids an over the top move as well as too extreme a club drop at the top and having the clubhead get stuck behind the body. It also avoids the feeling of swaying off the ball which is a real issue if you want to cultivate consistent striking.

I think it is a mistake to get to rigidly obsessed with getting the two parts of the swing looking identical. Firstly, it is a physical impossibility in an efficient golf swing and secondly it would give sub-optimal ball striking and impact conditions.