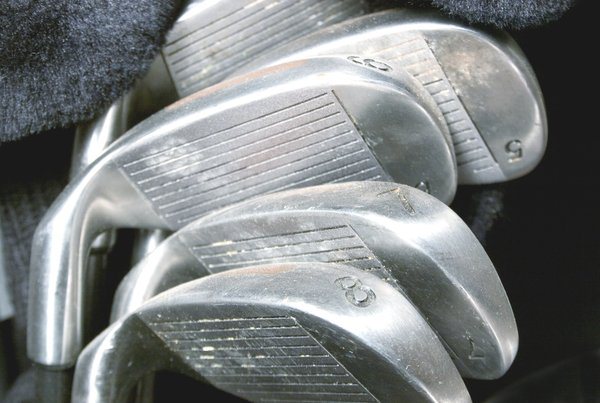 Even the absolute golfing beginner will notice very quickly that not all golf clubs are the same. Put a wedge next to 3 iron and the difference is obvious, even if they happen to come from something like a single length iron set. The clubhead looks different for starters. It will be a different size and shape. The two really important differences though are going to be loft and lie. These two are perhaps two of the key elements of club fitting and generally for good reason. Just how important is loft and lie and what difference does it make to your game?

The basic idea of these two elements is actually very straightforward to understand. Taking our 3 iron and wedge example above, if you put them down next to each other, the difference in loft will be obvious. The three iron is going to have a loft that, depending on your set, might be anywhere from 18 to 21 degrees or so. The clubface will look quite flat. You can see these even more on a driver face where the loft could be less than ten degrees.

On a wedge, the face will be visible in the address position because you are going to have at least 45 degrees of loft staring back at you. YOu might even have much more, even 64 degrees if you are Phil Mickelson. The basic effect of this is also obvious. While you might be worried that the 64 degree wedge will hit you in the face when you swing, you would be more concerned about getting that three iron off the ground at all.

Lie is actually also fairly easy to see. If you sit a golf club on the ground at address with the sole flat (parallel to the ground) the lie angle is the angle formed between the shaft and this sole. Once again, a shorter wedge will sit far more upright than a three iron, perhaps by 5 degrees or so (although this can vary quite a bit.) The reasons for this difference are both simple (a longer club is flatter in lie because the clubhead is further from you) and quite misunderstood (a club isn’t flatter/more upright to stop the heel or toe digging into the ground when you hit the ball.)

The Importance of Loft

Let’s start with loft which is somewhat easier to understand. On a basic level, loft is going to send the ball on a higher or lower trajectory. Even basic physics tells us that your 50 degrees of loft and 20 degrees aren’t going to achieve the same thing. The physics does get more complicated than this though. For example, someone might tell you that 45 degrees of loft is the ‘ideal’ amount to achieve maximum distance. This might be true in a vacuum, but it doesn’ work in reality. It you put 45 degrees of loft on a driver, it won’t go very far at all (except maybe straight up)!

The golf ball spins and this means that loft can be a little bit more delicate that you might think. A long driver champion is going to be hitting a driver with less than five degrees of loft whereas an eighty-year old woman will need as much loft as possible given her (probable) slow clubhead speed.

Loft is also a tool to sell clubs. That new seven iron you tried in the simulator that goes ten yards further? Well, no surprise there, it is actually the same loft as your current six iron! all things being equal though, the key is to use loft to make reasonable distance gaps between the different clubs in your set. Often, we will see 3-5 degree differences between clubs which will lead to perhaps 10-15 yard differences on well-struck shots. Slightly off subject, but this is why I think that bigger gaps and fewer clubs make sense for many because will slower swing speeds and less than perfect strikes, this type of loft gap can lead to bunching of distance between clubs.

The loft on the club is perhaps less than half the story though. Firstly, we don’t always deliver the club to the ball in the same way. CLubhead speed of course varies hugely and this means that, for example, someone who swings more slowly might not want to have lower lofted irons in their set. It also means that the actual loft being delivered to the ball isn’t what you think.

As an example, someone who scoops or flips at the ball with a club is delivering significantly more loft to the ball with the same club than someone who is hitting 5,6 or more degrees down. The ball will react differently. Of course, this is a fitting and swing issue but it is something to bear in mind. This brings us on to more complicated ideas like spin loft, which is basically the difference between the attack angle of the club face as delivered and the dynamic loft as presented to the ball. Trackman Golf explains this so much better than I ever could.

The thing that people also forget is that loft influences direction through what is known as D plane. You can see this again by setting the club at address. If you raise your hands you increase loft but the clubface will now (for a right-hander) point off to the right. Potentially, this is a problem, especially with lower-lofted clubs and can be why you see more directional issues with these flatter clubs.

Getting the Right Lie Angle

This idea of getting the right direction brings us on to the importance of lie angle. Lie angle generally varies from club to club by half a degree or so. This is part of a balancing act between club length and club head weight too (and one of the reasons why single length irons make a lot of sense.)

Lie angle is important, but not for exactly the reasons many think. There is a general correlation between height and lie angle in that taller golfers often play their clubs more upright, but there is no reason why this has to be the case. It tends to be a comfort thing in many cases. Making a club more upright means the taller golfer can stand less hunched without simply making a club much longer and therefore increasing overall weight and especially swing weight.

If you look at something like the Ping colour coded fitting system, they will generally fit a taller golfer into longer clubs and a more upright lie, depending on both height and also their wrist to floor measurement. As an example, I tend to get fit into white/silver/maroon which is going to be 3 degrees upright or more.

However, there is more to it than this. Firstly, it isn’t just about having the club sitting flat on the floor at address. The position of the club when we hit the ball can be quite different to this static address position. Our hands might be much lower or higher and we can also cause the toe of the club to dip as we swing, what is known as ‘droop’ which changes the effective angle as we hit the ball. This is why most fitters will use physical measurements as only a starting point and then adjust lie in what is known as a dynamic fitting, basically watching us hit the ball, often with a radar or monitor.

Getting the wrong lie isn’t just about comfort though. If we go back to loft, I said that lowering or raising the handle will cause the face to point in a slightly different direction. Altering lie angle will do the same. If your lie angle is too upright for your swing, you will often tend to lose the ball left, either as a pull or a pull hook. Too flat cause the opposite miss.

Lie angle can actually be used to some extent to compensate for ball flight caused by swing. If you are a golfer who tends to lose it left, flattening your clubs can help with this.

This is also an issue that is misunderstood by most golfers. They understand the result, but for the wrong reasons. You will hear that a club that is too upright will make the ball go left because the heel hits the ground first and forces the club to twist closed. This really isn’t true. Firstly because a good strike will involve hitting ball first and so it doesn’t matter what hit the ground. Secondly, if you are hitting heel side first before the ball, you are hitting it fat and the main effect on ball flight would be a very short shot. The real reason is, as we have said before, D plane and the way the face point s depending on loft.

Fitting For Loft and Lie?

I don’t want to make it sound as if it is impossible to play golf unless your clubs are perfect for your swing, stature, club delivery and everything else. This isn’t the case. I have a set of irons that are standard length, slightly flat and with old school (higher) lofts. I also have a set that are longer, more upright and have more modern lofts. Being completely honest, it really doesn’t change my game hugely. Of course, one reason for this might be that I am quite good at adapting to different clubs, who knows?

One thing that is worth thinking about is at the bare minimum, taking the time to either have a lesson with a pro on a launch monitor that looks at club head information or go through something like Ping’s online fitting process. It can be surprising just what a difference these two variables actually make, at least in terms of comfort and also possibly results.