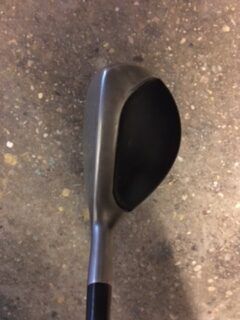 What is the Easiest Golf Club to Hit for Beginners?

I friend at work asked me recently about getting his son started playing golf. As a non-golfer, it isn’t always obvious knowing how to get yourself or someone else into the game. I explained to him that a lot of clubs over here do what they call golf schools and organise regular sessions for kids who are keen on the game. The entry barrier is relatively low because it isn’t expensive, especially compared to golf’s traditional image of a costly sport, and you don’t need to have your own equipment. All in all, a fun way to get started. We were also chatting about going to hit some balls together so that he could play a little bit too and I gave him a half set of some of the clubs I have lying around so he can get to a driving range if he wants. This inevitably led to the “what is the easiest golf club to hit for beginners’ question.

Is the Seven Iron Really so Easy?

The traditional answer to this question has always been “seven iron”-just ask Tin Cup. Countless beginners have had a seven iron put into their hands as they sign up for years of frustration (I kid, honestly) in their first lesson. This is one of the arguments given for basing most single length irons off a seven iron. There are some pretty solid reasons why this is a good choice too. Generally, shorter clubs are going to be easier to hit than longer ones, simply due to shaft length. A 7 will be easier than a 5, for example.

Secondly, more loft actually means more forgiveness too. The flatter the face, the more a club is difficult to hit for the person starting out and the more they will see the effects of their lack of swing basics causing the ball to arc off in all directions (although more than likely slicing for most.) Put a driver in the hands of any beginner and you can bet the last thing you will see is a straight shot.

With that logic, surely a wedge should be the best bet then? It is even shorter than a seven iron, perhaps by an inch and a half. It also has far more loft. Unfortunately, there are a couple of things that make the wedge less than ideal as a choice. Firstly, most beginners will be hitting standard length clubs there first time they play. This is fine for a fair cross section of golfers, but if you are tall or short, it might not be great. A 7 has the best chance of being a reasonable fit for most golfers. Of course, lie angle is another issue, but probably not an immediate priority for most people straight off the bat.

This large amount of loft can also be a problem. A good golfer will have a steeper attack angle (hitting more down into the ball) with these shorter clubs. This steeper angle is great for a better golfer, doing all sorts of good things like producing more distance, regulating spin and creating those lovely pro-style divots! Someone learning to hit the ball is generally not going to be hitting down because they will tend to try to lift the ball into the air. Obviously this isn’t something any pro worth his salt will encourage, but it will happen.

The low point of the swing will also vary hugely. As much as we might say that good contact should be ball/turf, for someone starting out it will vary from six inches or more behind the ball and the club digging in to six inches in front as he or she barely makes contact with the top of the ball at all. A slightly longer iron will be a little more tolerant of the average sweeping/hitting up swing and in fact a neutral attack angle isn’t the end of the world at all.

The other reason why a seven (or sometimes six) iron is thrust into the eager mitts of the man, woman or child starting out is that it is easily available. Almost all manufacturers use the 6 or 7 as a demo club. This means that the average club will have bins of demo sixes and sevens which make them perfect for those starting out. It doesn’t matter especially if they get damaged or dented, because they aren’t part of a set and won’t leave a missing club and there are also plenty more in the used barrel.

So it looks like the argument is settled, right? Well, actually, I would say yes and no. I don’t think that the choice of club itself is the key thing in fact. A seven iron will do the job, or an eight or a six. Longer or shorter than that might not be the best choice. However, I think we are missing a trick by not giving these beginners hybrid seven irons. I think the main reason is that higher lofted hybrids really haven’t been around for that long and most people haven’t really thought about it. However, nowadays, an all hybrid set is a real possibility. Even if you don’t go this far, trying something like a Mizuno jpx fli hi(in the photo above) in a six or seven hybrid is a lot of fun and something I did for a couple of seasons a while ago (why did I ever stop?)

So why do I think this is a good idea? well, firstly, it still ticks all the boxes that any seven iron does. A fairly neutral angle of attack is possible, enough loft to be friendly to hit and stay straightish, will fit a large spectrum of golfers in terms of length etc. However, it also adds in the advantages of a hybrid. The weight is low and back from the face which helps the ball get airborne for example.

One of the frustrations of starting out is seeing ball after ball rolling down the range instead of flying high. I am willing to bet that a fair few people have become disenchanted from being unable to get the ball flying like they imagined and just given up. Imagine if the ball actually got into the air more often? How good would you feel if you could do this a little bit more often early on?

The Benefits of Bulge and Roll

The other thing that is useful is bulge and roll. Essentially, this means that the face of a hybrid isn’t flat like an iron. It curves outwards slightly. The advantage of this is that it will cause the ball to curve back from the direction it is hit. For example, a toe hit which heads out to the right should come back a little bit. Obviously, this isn’t going to override the complete mishit that is par for the course for beginner, but it will attenuate it a bit.

The final thing that is worth bearing in mind is just how friendly a hybrid looks down by the ball. Many of us had a blade as the first club we hit. I still love blades as I have said many times and I think the myth of the butter knife that is impossible to hit is grossly exaggerated. For beginners, let’s just be a little be a little bit more reasonable. If we want to grow the game and encourage people to play, we should be making it as easy as possible and the blade isn’t the answer to that particular question. Today, a whole different level of tech exists. Why not take advantage of it?

There are a lot of solid reasons why getting a hybrid into the hands of anyone starting out makes sense. Perhaps they will choose to “move on” to a different type of iron. Or maybe not. We might witness more and more golfers simply staying with hybrids most of the way through the bag because that is all they have ever known and more power to them if that is the case.