Golf Club Distances: How Far Should You Hit It?

I always find it somewhat amusing that distance is perhaps the biggest tool used to sell golf clubs. Not necessarily for drivers where I think distance (under control) is a great idea. A driver which puts me ten yards further without altering my dispersion is never bad in my book. No, the thing that gets me is the use of ‘further is better’ in relation to irons. This begs the question: just how important are golf club distances?

I would say that I hit the ball further than the average golfer. Not as far as I used to and certainly not in Bryson territory, but distance with most clubs has never really been something that I have worried about. Funnily enough, this isn’t true with all clubs in the bag. I don’t hit my driver a huge distance, or at least not as far as you might think. This is probably due to some fairly ordinary swing mechanics for driver (angle of attack and so on) and also because I have never really taken the time to do a proper in-depth fitting to find that perfect shaft/head combination to squeeze everything out of what I have got.

How Far Do I Hit It?

With irons though, I tend to get plenty of distance, even with a preference for older clubs with less help getting the ball launched, heavier/stiffer shafts and old-school lofts. I know someone is going to ask just how far I hit the ball so I will give you those numbers and then maybe we should talk about why they really don’t matter to anyone except me.

These are what I would consider stock yardages. I don’t have to step on it to hit this distance, it is a ‘normal’ comfortable swing. I can certainly, if I choose, get a few more metres/yards, but generally I don’t. You might be looking at these distances and thinking that they really aren’t anything special. You would be absolutely right but maybe it is worthwhile looking in a little bit more detail. 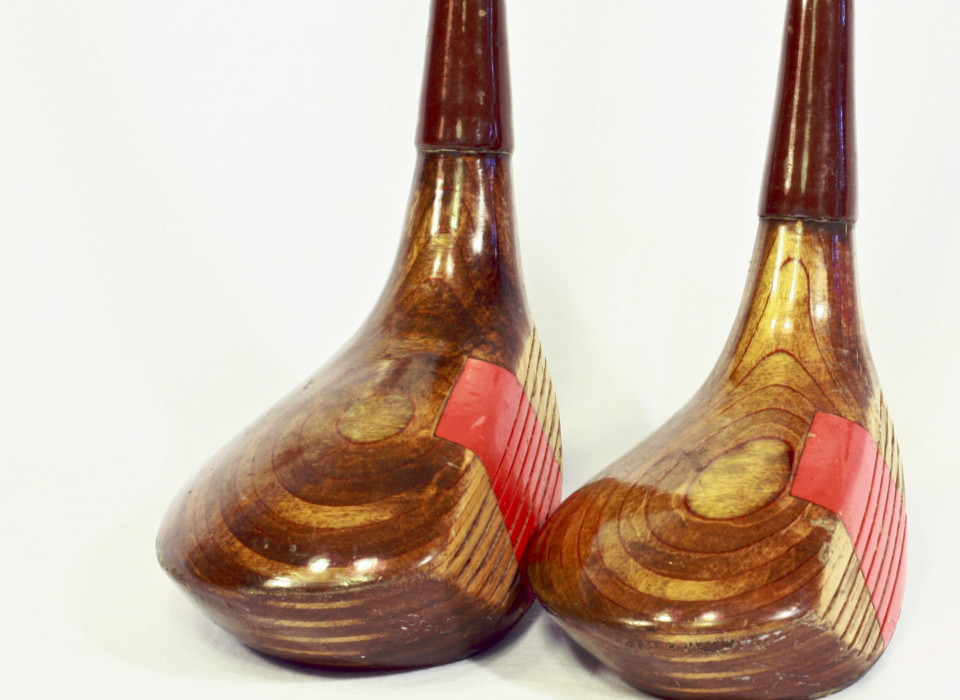 Let’s take my 7 iron. 147m is a solid distance to hit a seven iron. However, there are plenty of people who will claim to hit it further. Many of them might even be right. The difference is, this is not how far I can hit my seven iron, it is how far I choose to hit it with a normal swing and this is a key point. The advertising line of irons flying further really doesn’t help most golfers. Most golfers need to know what their usual, controlled distance is with a club. The fact that you can smash a 7 160m or more doesn’t mean anything if the next shot goes 140m. In fact, it only makes your life more difficult. The first one flies the green out of bounds and the second is sitting in that pot bunker just short!

The next point is the club that you think is a seven iron. My seven iron has a fairly heavy steel shaft and 34 degrees of loft. If yours is 28 degrees with a light graphite shaft, our comparison becomes even more pointless.

A couple of years ago, I went along to a demonstration day at my local club. I enjoy testing different clubs, especially irons. The manufacturer who was present that day was Callaway. Callaway make very nice golf clubs. I have a few, including a 60 degree wedge with the Famous PM grind that is a lot of fun. The irons that I tried were that year’s version of the Apex. Again, a very nice club. I was toying once more with the idea of graphite shafts in my irons and the fitter kindly put a regular recoil shaft in the Apex head.

I don’t know what the exact loft was, but the current version has 30.5 degrees of loft. The salesman/fitter set up trackman and I happily hit away. After a few shots, my average distance was someone around 170m/185 yards if memory serves. The Callaway rep showed me the numbers expecting me to sign on the dotted line straightaway. He couldn’t understand that I didn’t want to immediately hit my irons 20m further.

I popped into the golf shop that organised the demo day later that week and chatted to the owner, a good friend, who understood completely why I was less than blown away. He knows that if my 7 iron is now my 170m club, my pitching wedge is maybe now a 140m club. As someone who is not great at hitting three-quarter swings, what do I do from 130? or 115? You see my point? In many ways, it seems that distance irons are little more than an opportunity to sell more wedges! I saw one Japanese market set not so long ago that had a pitching wedge 1 (38 degrees!) and a pitching wedge 2 at 42 degrees. Do I then need two more gap wedges before hitting sandwedge territory?

The shop owner explained how tough it is to actually get people into the clubs that might be best for their game sometimes. The average golfer who sees a number 20 yards longer from his irons doesn’t really care why it is there. Stronger lofts and lighter/longer shafts are a non-issue. He wants 20 yards now! It is an easy sell but one that comes at a cost. This golfer is not scoring any better on the course. Neither is he hitting the ball more out of the centre of the club.

All this brings is back to the idea of the right distance. Finding charts that show the average distance of pros with each club is fairly easy. They are all over the net. Knowing that you, 15 handicapper, can now hit your 7 iron the same distance as a PGA pro is hugely flattering but it only tells half the story. He is hitting it that distance every time with his controlled swing. Give him your seven iron and let him hit it another 30 yards. He might enjoy it but I would bet pounds to a penny that there is no way he wants that club in his bag when his livelihood is on the line.

Does this mean distance charts are useless? Not necessarily. I have one distance chart that I love looking at. It gives the following distances:

Not very impressive, is it? I would guess that many semi-regular golfers would be fairly disappointed with those yardages. So how might this distinctly average hacker be? In fact, it is none other than Ben Hogan, considered almost every golf aficionado to be one of the greatest players of all time. Makes you think, doesn’t it?

So how far should you really hit it? what should your golf club distances be? Honestly, it doesn’t matter too much. I used to enjoy the fact that my distances were better than the average LPGA pro for example, often comfortably better. Then I thought that all of these ladies could probably give me a shot a hole on the courses they usually play and still win without breaking sweat. How was my distance helping me? In the same way, I probably hit it at least 15 yards shorter per club than I did a few years ago through a combination of age, injury and controlling my swing better and yet I am perhaps ten shots better than my younger self.

The key is not how far any given club should go, it is knowing how far you can hit it regularly. This might mean that you are pulling out a five iron at 155 yards like Mr Hogan or an easy pitching wedge from the same distance like many pros today. As long as this is the case consistently, you are hitting it just exactly as far as you need to.