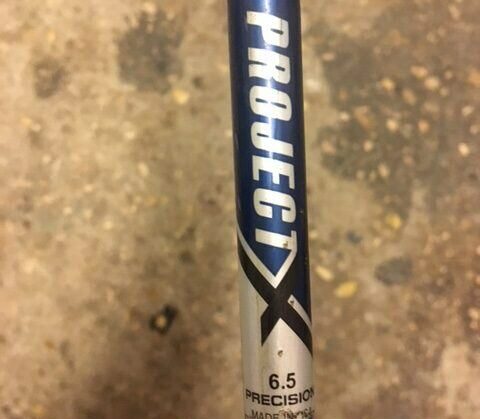 Why I Play an X Stiff Shaft in My Irons

Shaft Flex is always a hot issue in the golf world. What any given golfer “should” be playing is always open for debate as the keyboard warriors flex their critical muscles behind their screens. To be fair, I did have a few preconceived notions on this stuff myself but the more I try different things, the more I realise that flex isn’t the key idea that many believe. I thought taking a look at my own bag and why I play an x stiff shaft in my irons might show why my beliefs have shifted over the years.

What is X Stiff?

The first really big problem when talking shaft flex is that there is no standard measure. What one brand considers x, might be labeled firm in another. In fact, how do you even compare tow different shafts in the first place? Stiffness is not actually an objective value at all.

In fact, what is often compared is CPM, or cycles per minute. This is measured by fixing one end of the shaft in a grip and then pulling the other end down and releasing it to made it oscillate. The number of times it ‘wobbles’ is the CPM. This number might be somewhere in the 200 to over 300 region.

This seems reasonable until you look into it a bit more deeply. Firstly, this isn’t as precise as some people will tell you. This means that the value recorded by one person isn’t going to be the same as another. It might not even be the same from one day to the next hen done by the same tester! To be fair though, these differences will generally be quite small.

It also isn’t how the manufacturers themselves measure shaft flex. It is back to the same idea of one manufacturer’s label being very different to another.

Is CPM Really a True Test of Flex?

Let’s imagine that CPM really does give a constant and reliable measure. In truth, it is probably as good as anything else. The next issue is what we actually do with these results. If we have two shafts that give similar CPM numbers, do they actually play the same?

The short answer is no. Firstly, this CPM number will actually vary along the shaft. This is why some shafts are referred to as “butt stiff” “tip stiff” or whatever. This is going to affect how the shaft actually plays. This is where things really get tricky. We could have two shafts with similar CPM but different profiles. We could also have two golfers with similar swing speeds but very different swings, swing mechanics, transitions and builds for example. It isn’t as simple as fitting a CPM to a swing speed, although that is certainly something that could be used in a fitting.

Let’s come back to my current favourite irons. They have a Project X 6.5 steel shaft in them. This is, by most people’s rating, an extra stiff shaft. It is often compared to something like a true temper x100 as far as stiffness goes. The thing is, if I were to do a fitting today, I doubt that the 6.5 would come out as the best shaft for me and I am sure that nobody would recommend it to me based solely on my current swing speed.

The reason I play this shaft is, at least partially, sentimental. I was fit into the exact irons I have now (shaft, specs etc) about ten years ago. I had more swing speed and a more aggressive move onto the ball and the numbers they gave as well as the feel were perfect. So good, in fact, that I second guessed myself and didn’t get them. It would have been an expensive purchase and I let people talk me out of them because they said that ‘only pros play x stiff iron shafts like 6.5.’

A friend sold me this set about two years ago and I jumped on the opportunity because I regret not getting them before.

You might be thinking that I struggle with these shafts that are no good for me just because of nostalgia. This isn’t actually the case and it brings us back to the whole area of shaft flex. I have played all sorts of different shafts from lightweight graphite to heavy steel and soft-regular flex to extra stiff. This is obviously a personal, but I can generally adapt to most things.

Before someone shoots me down, I am not saying that I am great with anything. Simply, in terms of irons, it doesn’t make a huge difference. In drivers, I really struggle with things that are good for me and can’t hit something that is too stiff/flexible, light/heavy very well at all. In irons, not so much.

I am also not saying that my results with an x stiff shaft are ideal. I would guess that if I went through a detailed fitting, I would find other shafts (possibly quite a few other shafts) that suited my swing better and gave better results.however, I really don’t believe that the difference would be huge.

I am not leaving a huge amount of distance on the table. I would certainly get more yards with a lighter graphite shaft but would I get better results? Would I lose in front to back dispersion? What about too much curvature? It isn’t all about how far.

The Importance of Weight

I now think that weight is actually one of the most important things in shaft selection and why an x stiff shaft isn’t a problem for many people. I am quite a big human. I am, despite my creaking joints, stronger than the average golfer. There is something about a project x shaft in terms of weight and bend profile that suits me. In fact, I would guess that the fact that it is 6.5 rather than say 6.0 (stiff) or 5.5 (firm) that really makes all the difference. I think that I would, in fact, fit better in the regular version of this shaft than in the x stiff of a Dynamic Golf, a KBS tour or whatever.

This is, I think, the key. We should all in general be a little bit less worried about shaft flex because it isn’t really that precise and doesn’t give us enough information that is useful. If my swing speed is 85 mph with a seven iron (and honestly, I have no idea what it currently is), this might mean on paper that a certain flex is great for me.

Golf isn’t played on paper. My reality might make an extra stiff shaft great for me. Or not. As I have talked about a few times, joint pain is probably going to take me to something softer and lighter, probably graphite, before too long. My swing speed will still be the same and yet I will be playing perhaps a regular flex under 100 grams. Once again, flex isn’t the decider.

previousHitting the Lob Shot
nextWhat are Greens in Regulation?