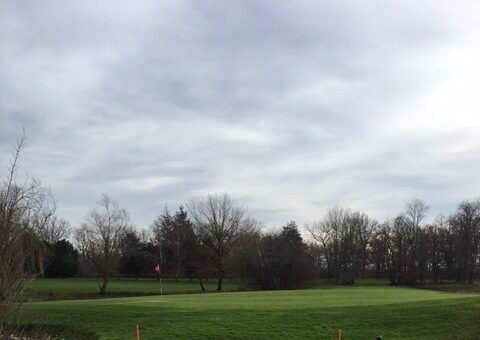 What are Greens in Regulation?

There are a lot of stats in golf, from driving distance to number of putts. I am planning to write a series of articles looking at these stats and the importance they might (or might not) have for the average golfer. One of the most used reference points on the course is greens in regulation. What is this exactly, how useful is it as a stat and how does it correlate to just how well you play golf?

Hitting a green in regulation is quite simple to understand. It means being on the putting surface in the holes’s par, minus two shots. Let me try to explain a little bit better. If you are standing on the tee of a par 4, this means that you need to be on the green in two shots. We then count two putts per hole which gives the par number. In other words, a par four ‘should’ be a tee shot, an approach shot into the green and then two putts.

Clearly, this isn’t the reality of golf, whether you are Rory McIlroy or the 36 handicapper who has been playing for a year however, it does give a common way of comparing how we are actually playing a golf hole.

It is also something that lets us see both how well we are progressing and, if we look at bit deeper, at the areas of our game that are under performing (or actually are doing better than we might think).

It is quite interesting to see exactly what different golfers are doing in relation to the number of greens they actually hit. This link from the PGA tout ranks the current leaders in this category. The best are hitting probably around 14 greens a round. This might not seem that impressive, but remember that these guys are aiming to land it on the green at your local municipal course off the front tees. They are shooting at very tough pin locations from a long way. When your second shot into a par 4 might be from 200 yards and that green is extremely well protected, suddenly hitting 80% of greens in regulation looks a lot more impressive, doesn’t it?

What about the rest of us? Well, it turns out, some unsurprisingly, that there is a close correlation between how good you are (at least in terms of score) and how many greens you hit. There have been lots of statistics compiled and the results look something like this:

This is not an exact science, but this pattern follows a lot of scoring rounds recorded by various different sources.

Somebody actually gave me a very useful way of relating score to GIR and I have found it to be true over a fair few years, regardless of course par etc. Essentially, you double the greens in regulation hit and subtract that from 95. So if you hit 10 greens, that would be 95 minus 20 which is 75. This corresponds pretty well with our handicap chart above. Of course, it doesn’t necessarily mean that you will have scored exactly 75 if you hit 10 greens. It might be 73, 78 or whatever, but it isn’t too far away in all likelihood.

This is where GIR gets really interesting and actually quite important as a way of tracking how well we play. For example, a lot of people set an enormous amount of importance by the number of putts they take. 28 is better than 32, for example. This isn’t always true and it is going to depend on the number of greens.

Here is a simple example to show why this is the case. L’s imagine that our golfer hits 10 greens in regulation. The other 8 he hits in GIR+1, or one more shot than regulation. If he takes 36 putts, he would shoot 8 over par. With these 32 putts, he has shot 4 over par.

Putting stats are only really relevant in relation to greens hit and this is why now we tend to look at average putts per green in regulation. If you are hitting a lot of greens, it is likely you will take more putts simply because some of the first putts you get will be long lag putts. If you miss greens, you will often be chipping and therefore have generally shorter first putts. You will inevitably hole more putts (or at the very least, avoid a few three putts) and so take fewer putts but perhaps not score as well.

This has been something that has been very obvious in my own game. I was able to kid myself that I was doing better than I really was, especially in relation to my short game. For example, when my irons were ‘on’, I could hit a lot of greens. I wasn’t actually scoring as well as I should have though. I might hit10-12 greens and this should have led to scores in the mid seventies at worst and yet I might have carded 80 or 82.

The lesson was simple: my putting, especially my lag putting, wasn’t good enough and when I missed greens, I wasn’t chipping it close enough to get up and down. I was happy hitting some very nice iron shots but I shouldn’t have been because it wasn’t helping me score better. The days when my irons were a bit off and I was hitting 3 or 4 greens, there was no way I could play to my handicap, even though I wasn’t missing the green by a long way.

The same is true in the other direction too. I have told this story before, but one of the younger golfers went round in close to par missing virtually every green a few years ago. This was rightly lauded as an excellent performance and his short game performed beautifully, getting up and down from everywhere. However, the lesson for him was that he needed both more distance off the tee in order to hit shorter clubs into the green and also be more accurate with his irons. His short game couldn’t bail him out every week.

Greens hit can be somewhat of a depressing statistic of course. From the stats above, we can see that an average golfer doesn’t hit many greens. I am a single figure golfer and will play plenty of rounds where I am missing more (sometimes comfortably more) greens than I hit.

It can be frustrating trying to get from 3 greens on average to 4 or thinking that we are playing quite well and essentially missing virtually every target we aim at.

There are a couple of things that I do to help. the first is simply to think about GIR a bit differently. You might want to think of this is GIR plus. I consider anything that is on the fringe of the green as a success as far as my personal GIR plus stats go.

For example, I might get to the end of the round having hit 6 greens. But perhaps I finished on the fringe only a yard or two off the green on 5 more occasions. I know that I am very close to getting double figures in GIR. I only include ‘misses’ that are puttable or very close to being puttable though. A miss that finishes just off the edge 5 yards from the flag doesn’t count if it is sitting in the rough or a bunker, for example. A miss that is 20 yards away on the far side of the green but sitting on the fringe when I will reach for my putter would count.

Another thing that works well for confidence is to play from a shorter set of tees and count greens in regulation. For example, I often played from the ladies tees and tried to hit, if possible, every green in reg. I honestly can’t remember if I did succeed or not, but I am fairly sure that I was at least very close most of the time.

This might seem like a strange one, but it is a great habit to get into. Playing from shorter tees gets you used to the feeling that hitting a green most of the time is the norm rather than the exception. Of course, you won’t want to do this all the time, but for me, it did definitely help when I went back to the normal tees. It started to see a GIR as something expected rather than a bonus and this, in turn, led to more greens hit and better overall scores.