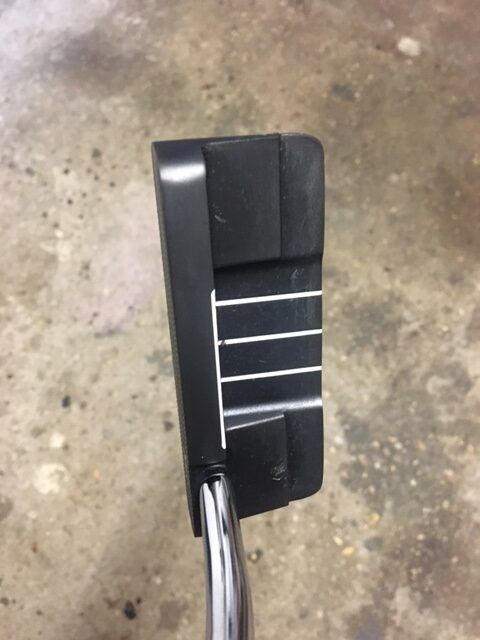 Until the last couple of decades, putter head shape was a non-issue. All putters were the same, essentially a blade with a couple of degrees of loft. Then the ping anser style putter came in and that was the new norm. Nowadays, the range of possible styles from blade to spaceship on a stick is huge and perhaps the most important choice most of us make when choosing a new putter.

Feeling Comfortable with you Putter

More than any other club, the putter is a personal choice. You can spend hours looking at statistics, spend time getting lessons on your stroke or even spend time with a detailed putting analysis tool like Sam Putting lab, but ultimately you need to ‘feel’ that the putter you choose is going to be right for you. As an example, I did some of best putting with a classic bullseye putter. This probably wasn’t the best for me in terms of my ‘twitchy’ putting stroke. It didn’t have any lines on to help me aim. It certainly wasn’t very stable and would twist far too easily in my hands, especially on off-centre strikes. However, it just felt right in my hands.

Unfortunately, I decided that my putting would benefit from something more up to date and so I sold it and started playing around with something that had all the modern bells and whistles on it. Aim lines, weight well back of the face, high MOI and so on. I didn’t necessarily putt worse with these, but I never felt the same harmony with the putter as I addressed the ball. It all felt too mechanical and that wasn’t the feeling I wanted at all because when the mechanics broke down (and they certainly broke down:) I didn’t have anything left.

This doesn’t mean that we should all go back to blade putters. Tech is important in golf and it can certainly help. Many golfers have found that certain putter styles have made them far more efficient on the green. It is still very important to keep the idea of feel and what you want to play, not just what the technology says. If confidence and comfort levels are high, you are going to make more putts, period. So just what choices are out there?

The Blade or Bullseye Putter

The most basic style of putter is still the blade. If you are looking for real old-school putting, this is your choice. You will certainly have to look through the second hand markets, car boot sales, and stuff stored in the attic because nobody really makes a true old-fashioned blade putter anymore. In all honesty, I love the look of these, but I would say that you have to be pretty confident on the greens to get them to work. I have a friend who is a really good putter and he is currently using one. He loves the feels and has no problem sinking putts from all over the place with them.

The difficulty with a blade or a bullseye which is slightly more stable tends to be on short putts. On long putts, I actually prefer this to a bigger headed club, but on short putts it can be hard to aim, easy to hit the ball slightly off-centre and difficult to keep a smooth stroke under pressure. If you are prone to miss the occasional tap in, you might want to leave this for someone else.

If you like simple and classic but perhaps not true 1950s style, you might look at an anser style putter. This is what I have in my bag currently as you can see in the picture. This type of putter can be found from virtually all the manufacturers. It is known as an Anser style because the first model with this head shape was the Ping Anser and it remains one of the most popular putter styles ever. If you can find a genuine anser from a couple of decades ago, they are still fantastic putters with a distinctive sound off the face. 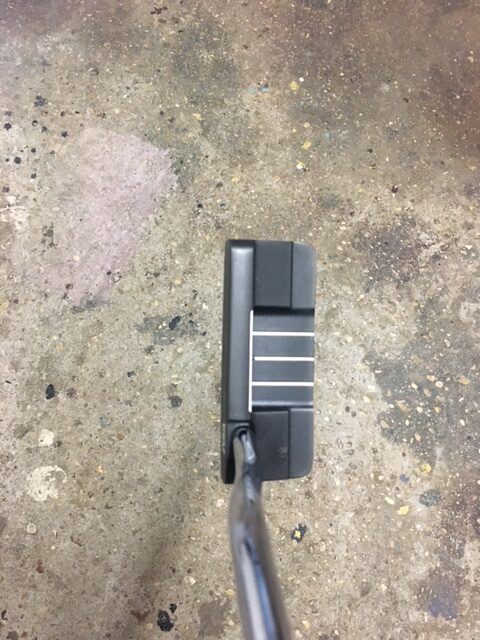 Personally, I like this type of putter because it remains relatively simple and classic but modern design means that it does offer some help. For example, it will usually have some sort of line up line on top and will be relatively stable. This stability usually involves weight being in the heel and toe of the putter and slightly backwards of the face which creates a higher MOI (Moment of Inertia). A high MOI means that it is more resistant to twisting as it goes through impact, essentially making it easier to keep on your chosen line.

The Semi-Mallet Putter for an Arc Putting Stroke

The next step along would be a semi mallet style. This includes quite a wide range of head shapes, but basically most will have some sort of rounded back and generally a larger head size than an anser or blade. I had one of these in my bag previously as you can see in the next picture. 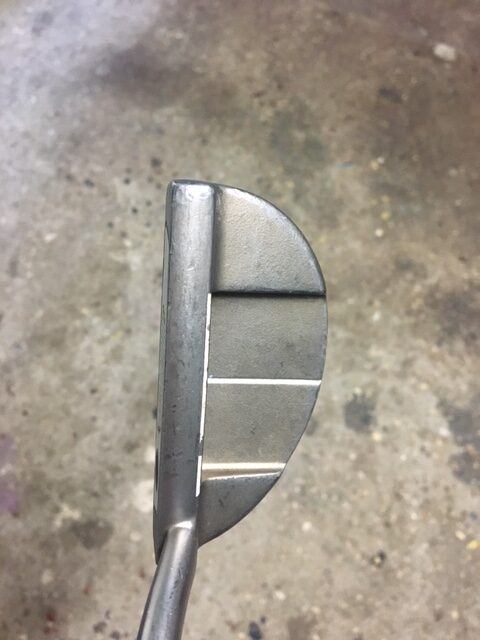 These offer a nice compromise between relatively classical looks and stability with weight further off the face. At this point, it is probably worth mentioning the role that your putting stroke should make in the choice. If we look at a semi mallet, it tends to work quite well for golfers who have at least a slight arc in their putting stroke. Essentially, those who take the club back on a curve towards the inside and then reverse the motion through the ball. This doesn’t need to be true, but it can be worth thinking about if you have this style of stroke.

Of course, you can putt with anything using any putting stroke. Generally speaking though, the larger a putter’s head actually is, the more it tends to fit people who have a fairly straight back and through, pendulum type stroke.

The final step in putter styles is what is often known as the Spider style. This is because the best known of these is the Spider Putter from Taylormade. This type of putter tends to be a love it or hate it thing. It is far from classic in its looks. The putter head is very large, often their will be weights or ‘arms’ that sit out to the side and well back from the face. The advantages here are quite obvious. The head is going to be very resistant to twisting. It is usually extremely easy to aim as well.

In theory, this should be the putter for me. I can get a little bit twitchy, especially on short putts. However, I just can’t feel comfortable looking down at something that generally looks more like a model spaceship than a golf club! I would say that this is a really good type of head if you are less confident on the greens as long as you don’t mind the visual aspect. It is especially good if you have a straight back and through stroke.

Of course, you can have far more variety than these three basic flavours. For example, you can have each model with a heel shaft (see below) or a centre shaft. This is going to change things quite considerably.

You can also play with things like shaft length depending on height and personal choice/comfort. Then there is grip. Putting on a very thick Superstroke style grip will change feel and results a fair bit. Finally, it is getting easier and easier to adjust head weight. Previously, this would involve sticking layers of ugly lead tape on the head. Nowadays, many putters can be bought with varying head weights and also ave kits using something like varying weight Titanium screws that can be removed and replaced in order to get a specific weight and feel.

All this means that head shape is far from the only variable. In fact, the same head shape will feel radically different simply be changing the length, grip, head weight and shaft placement. However, this head shape is still going to be the most important starting point in putter choice for most of us. If you don’t feel comfortable looking down at your putter, all the rest isn’t going to matter.

previousBlades vs Cavity Backs: Which One is For You?
nextThe Texas Scramble: My (Current) Favourite Game