I love blades. I have owned quite a few sets over the years from classic to modern. I have also played with some of the chunkiest game improvement cavity backs you can imagine. I have enjoyed and continue to enjoy golf with a whole range of different clubs. Unfortunately, I hear and read some absolute rubbish about blades vs cavity backs, especially from people who haven’t actually spent any serious time on the course with a set of butter knife blades! Hopefully this article will give you a clearer picture of the pros and cons of each and answer the eternal question ‘can I really play blades?’

The short answer to the above question is obviously yes you can and I wrote about the reasons why here. Anyone can play with whatever they choose. In fact, you should play with whatever is going to give you the most enjoyment on the course. Of course, it would be nice to delve into a little bit more detail and I have added in a few photos from my own club collection to try to explain the reasons why you might want to choose one or the other.

Blades vs Cavity Backs: Some Definitions

Let’s start with some definitions. You might be surprised at just how wrong people get this too. For example, below is a photo of my irons. Cavity back or blade?

These are a set of (relatively) classic Mizuno MP64 irons. No, these are not blades and yet I regularly have people telling me that they are. They might have a thinnish top line and sole, but they also have a (small) cavity in the back. If you want to see what a blade looks like, try this.

This is a very old-school blade from the 1950s. It clearly doesn’t have any cavity and has a leading edge so sharp that you could shave with it. If we compare it with something like the picture below, the difference is huge.

This is a classic Ping ISI iron, simply the first cavity iron I pulled out of the reserve bag. It is fairly old, but basically has the same characteristics as the average modern day super game improvement club. 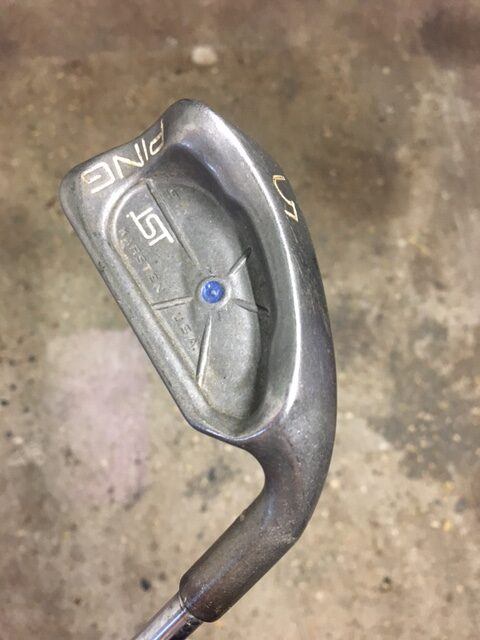 This is part of the problem. What is known as a player’s cavity back is actually far closer to a blade than it is to one of the oversized cavity backs with a deep undercut and wide sole. Hopefully you can see that the whole blades vs Cavity backs discussion really doesn’t make that much sense because the distinction isn’t as clear-cut as many would have you believe.

All Cavity Backs are Not the Same

We also have the blade snob who is going to debate on the minutiae. For example, they will tell you that such-and-such a club isn’t a blade, it is a muscle back. Really? I agree there is a very small difference between a club that has a completely flat back and one that might have a thicker ‘pad’ of metal behind the centre of the club, but these two are both essentially part of the blade family.

So the real question then is what should any golfer be playing? Once more we are actually in murky water here. For example, let’s go by handicap. At what handicap should a player switch to blades? Well, looking at the bags of players on the PGA tour already gives us an insight in to the answer to this particular question. Take a look at this list of What’s in the Bag (WITB) from golfwrx, for example. There are certainly some blades, but at least as many cavity backs and even the blade players are likely to have a friendlier long iron in there somewhere. In fact, statistics from titleist say that almost three quarters of their pros play cavity backs. That being the case, surely the rest of us should play them too.

Not so fast. I know so fairly ordinary golfers (myself included) who like to play blades. I used to play with a guy quite often who was on the edge of single figures and had a set of Mizuno MP4 irons in his bag. These are most definitely blades! And he hit them fine. In fact, better than fine and his iron play certainly wasn’t costing him shots on the course. If anything, it was thanks to his iron play that he kept his handicap.

Handicap is an unreliable way to judge what to put in the bag. What we need to know is what actually makes one club a better fit than another and look at that miss-used word, forgiveness.

Forgiveness is used in the golf industry far too often. It has become a buzzword in marketing and unfortunately, a lot of golfers read too much into forgiveness. Don’t get me wrong, I don’t subscribe to argument that says beginners should use blades to make them better ball strikers, but neither do I believe that some golf clubs offer a miraculous level of forgiveness that can save a poor swing.

There are certainly elements in iron head design that will make a club easier to hit. Obviously, a club with a larger head offers more hitting surface. Likewise, perimeter weighting will give a sweet spot that is bigger than the sweet spot of a blade. However, this difference is actually a lot smaller than most people realise. There are very few clubs where you can hit it all over the face without getting penalised.

Cavity back irons are generally doing to have a wider sole which certainly does offer some advantages. Firstly, it pulls weight off the face of the club and takes it further back and lower. This means that the ball will get airborne more easily and fly higher. This is why you don’t see many (any?) professional golfers with large cavity backs. They tend to have faster swings that generate a lot of spin. Playing the latest super game improvement irons would see them putting the ball far too high into the sky with too much spin. Ironically, some of these irons are also extremely de-lofted and won’t allow the average golfer to generate enough spin. The ball will go a long way and roll but this can be a problem if you are looking to hit a green and keep the ball there.

Traditionally, blades had there sweet spot very close to the heel of the club. It was said that a shank was millimetres away from a perfect strike. Modern blades tend to have their sweet spot far close to the centre. This is something else that is often forgotten: The 1950s blades above are a difficult club to hit. The leading edge is very sharp and digs if you are anywhere near hitting it fat. The sweet spot is tiny and near the heel.

Modern blades are actually a far more friendly proposition. Modern clubs are computer-designed and it is possible for them to be relatively easy to hit, certainly far more so than blades from years gone by.

This explains why some fairly average golfers can do well with blades and perhaps even be better-suited to blades that cavities. My friend the 10 handicapper is a very strong guy. He has played other sports at a high level and has good hand-eye coordination. He hits the centre of the face well and generates a lot of speed with a solid swing. A blade works well for him.

I also often play with lower single figure golfers who really aren’t comfortable with blades. They are perhaps slightly older and have less speed or don’t really have stellar ball striking and want to see something as friendly as possible sitting behind the ball.

This all takes us back to the same question: what should I play? Once again, golf is leisure activity. The idea is to enjoy it. If you get more pleasure from an all hybrid set or custom set of Miura Blades, it is all fine. Don’t let anyone try to convince you otherwise. Firstly, you will be amazed how little difference it actually makes in terms of score. I have played competitive rounds with blades older than me as well as having up to a seven hybrid in the bag. The difference this has made to my score is either tiny or actually non-existent. If I drive the ball well, putt well and my short game is working, I will score, regardless of the irons.

Looking at the Numbers: Building a Score

Some numbers show why this is the case. If I take an average course. It is a par 72 with 4 par fives and 4 par threes. Let’s imagine that we go round in par, hitting all the greens and two putting everything. So out of this par 72, 36 of these shots are putts, leaving another 36 shots. Off the tee, perhaps we hit driver or hybrid, fairway on all the par 5s and 4s and perhaps hybrid on a long par three. That is another 15 shots, leaving 21. Now we perhaps play a fairway wood once as a second shot on a par five and a hybrid four times on par fives and fours as a second shot. That’s five more shots, leaving 16. See where I am going?

Now we can actually dog even further. Out of these 16 iron shots, I would guess at least half a dozen are wedge or short irons. Given that wedges are generally blades anyway and hitting a nine iron isn’t the hardest shot in golf with whatever club, that leaves us perhaps ten true iron shots in the round. This is why I say that irons aren’t going to be responsible for your score.

This holds true even if you are shooting closer to 90 than 72 in this fictional example. Most of the extra shots are going to be wedges because of missed greens, for example. In fact, in terms of percentage of shots played, your might even be hitting fewer iron shots as your overall score goes up!

Of course, you might say that you still have to hit these ten shots and hitting a five iron blade even once isn’t going to fill you with confidence. Fine, it isn’t a black and white issue. Why not build a combo set which is ridiculously easy to do. I played with a friend last week whose bag if the perfect example of this. He has Mizuno HMB irons from 4-7. This is a hollow body iron, so looks aesthetically like a blade but essentially has a hollow cavity inside, often filled with foam. He then has mp 20 blades in 8,9,pitching wedge.

The two halves of the set blend very well, are as easy as possible to hit in the longer irons and offer him all the pleasure he is looking for by playing blades in the shorter irons. This guy is a 15 or so handicap and has been for as long as I have known him, more or less.

As I re-read this, it might look like I trying to push everyone into blades. I do love blades, but this isn’t the case at all. What I don’t enjoy is the common knowledge of “…………….shouldn’t play blades” or ” at you handicap, you should……..” If you have alwys wanted to scratch that blade itch, there is no reason not to. Finding a reasonably recent blade with a shaft that works for you can be an absolute revelation.