How To Practice Putting 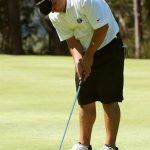 You will often hear that a good short game is the key to shaving strokes off your score. Whilst it is true that keeping it in play off the tee and hitting a few more greens will make a difference, holing more putts is always going to make the biggest dent when you look to take a few shots off that card. Just imagine going from 36 putts to 32, for example. There aren’t a lot of areas that will cut four shots in one go.

So it would seem that spending a few hours on the practice green is the best way to get better then. Whilst this is undoubtedly true, it isn’t going to happen for most golfers. Why is this? I would guess that the two main reasons are time and boredom.

Not many golfers have unlimited time to perfect their putting stroke. We have all read the advice from the pros who say that they spend half their practice time or more doing this, but for the rest of us, that means that we don’t have time to do other stuff like hit balls or actually get on the course!

The Best Way to Practice?

I don’t know about you, but if I have a choice, I would rather be on the course than on the putting green.

The second point of boredom is actually linked to the first. When your livelihood is on the line, it isn’t that difficult to hit 100 three foot putts in a row. Well, it is difficult, but at least you know why you are doing it! The difference between making and missing could be hundreds of thousands of dollars.

I don’t know about you, but I just can’t do this. Especially since I get a great view of people on both the range and the short course while I can see a close up of my wobbly putting stroke! Even with the best intentions, I usually crack after about 10 minutes and head for the short course (which is, of course, a great place to practice in its own right.)

So much for the problems. what about solutions? well, I have been giving this quite a bit of thought recently for very practical reasons-I am what is know as a streaky putter. Some days, I really make some lovely putts, but more often than not, I am standing over my first putt hoping that it finishes within gimme range. Whilst this says a lot about my fragile mental strength, I don’t think I can afford the therapy to get that sorted just now, so I would rather find another solution!

Don’t Get Bored when You Practice

Actually, given that there are two main obstacles (boredom and time), I needed two answers. Fortunately, I have them.
I think the key to getting the most out of my time on the practice green is to make it fun. I know that there are some really great techniques involving putting pieces of string along the line, checking face path and so on. I should probably be doing this. But I don’t because, well, it feels like work! I want to play. The idea of making it fun actually came from watching a bunch of youngsters on the practice green.

Now, without a doubt, they are fearless on there, which helps. The idea of leaving a tricky four footer coming back doesn’t cause them to lose sleep (am I the only one?) They were laughing and joking as they played. And they were still having fun an hour later. They weren’t worrying about their putting stroke or spending hours eyeing up the line and perfecting a routine. While this is undoubtedly important, it won’t keep me practicing.

Fun Games for the Putting Green

So what games can you play? There are lots, but here are some that I enjoy.

I find the idea of repeatedly hitting the same putt horribly boring. But I like a challenge and this game is one I do quite often. I simply start with the ball about a foot from the hole on a pretty straight putt. I then (hopefully) roll it in-although I have been know to miss! After this, I move it one inch further back. and then another inch.

This works well for me because, at the start it is so easy and it means that I will roll in 20 or so short putts without thinking too much. The aim is simply to roll in as many consecutive putts as possible and try to beat your record. Because each putt is only an inch further than the last, it seems exactly the same and I find that it is great for grooving a repeatable stroke.

The idea of keeping core makes it interesting-far more so than hitting 20-30 short putts, for example.

I live in France, so pétanque (or boules as you might know it) is a national sport. If you don’t know this game, it basically involves throwing metal balls as close as possible to a smaller ball, the jack.

This transfers really well to golf. It also takes the emphasis off holing putts all the time. You can play with as many people as you want. You need 3 balls each (but again, you could use more or less, it doesn’t really matter).

The first player chooses a target, usually a hole location that is between 5-10 yards away. He putts towards it, trying to get as close as possible. The next player then tries to get closer. After each player has putted once, the player who is further from the hole putts. If he doesn’t get close, he putts again until he has no more balls. It is then back to the first player (whose ball is close to the hole) to putt.

You score points for every ball you have inside the the other player’s closest ball. For example, with three balls each, you could score 3 points if all three of yours are closer than your opponent’s. The first player to 12 points wins.

A bit of strategy comes into play here. Sometimes you might deliberately lag a putt short to block the line. Likewise, you might hit it hard and try to knock someone else’s ball out of the way. It is also a lot of fun to play in pairs with each player in the team having three balls.

The serious point for me in this is that I forget about the technical side of putting. I worry less about whether I am coming straight through, if my face is closed and just putt (which is, at least for me, the key to putting well.)

How To Make Time for Putting

Someone once told me that if something was important, I should do it every day. I have applied this to lots f different areas with success, but didn’t think about it for putting at all until recently. Like most golfers, I really want to ingrain a solid putting stroke, but have spent far too long thinking that this could be done with an hour a week on the putting green.

It struck me (not for the first time!) that I was being incredibly stupid. surely, putting is actually the easiest part of the game to go at home. You might struggle to get your driver swing right in the living room, but everyone has space to roll a putt or two.

You don’t even need to have any special equipment to do this although getting a decent putting mat makes it both more enjoyable and far more realistic. Just keeping a putter in the corner of the room with a couple of balls means that you can hit a few putts every day-certainly the best way to perfect anything.

It seems to me that this is the simplest way to feel comfortable with the flat stick in your hand. Just by having a few putts throughout the day all day, every day, this is actually going to add up to a lot of time spent putting.

Of course, I would like this to be as realistic as possible. Having tried quite a few different artificial putting greens over the years, the range from outstanding to useless. You can find a review on my current favourite here, but there are other choices too and at a push rolling some putts along the hall carpet is fine.

Of course, most golfers dream about having the ultimate basement putting green or even a real outdoor green. This is certainly doable but is going to require a larger financial investment (but certainly well worth it  if you do have the funds)

Maybe the key is to find ways to make putting interesting. Playing games can transform practice time. This is true for all aspects of golf, but given the repetitive nature of putting, it becomes even more important. I also love the idea of getting most of my putting practice done at home and spending my precious time at the course actually playing the game!  combination of these two things should see most golfers having ore fun and also holing a few more putts-and who doesn’t like lower scores?

5 Things We Learned from the Masters

7 Simple Ways to Score Better on the Golf Course

How to Choose Your Wedges

Minimalist Golf:Less is the New More?

←Previous post Next post→
fairwayfirstgolf.com is a participant in the Amazon Services LLC Associates Program, an affiliate advertising program designed to provide a means for sites to earn advertising fees by advertising and linking to Amazon.com