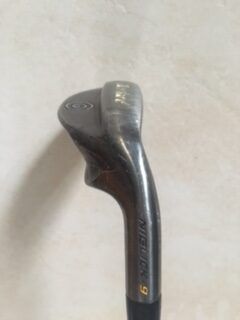 Golf is full of controversies. The whole blades vs cavity backs debate, for example. Or what about belly putters? Single length irons, anyone? People tend to have strong opinions on things. Unfortunately, a lot of these opinions aren’t really based on much, certainly not on any actual facts! I have lots of golf opinions. One thing that I do like to do is try things out before giving my opinion. I do find it a little bit galling to read the ins and outs of single length irons from people who have perhaps played with them once or more likely, not at all. In the same way, I have read a lot and watched a lot about using a chipper over the last few months and whilst some of it is interesting, it is clear that many of the people doing the talking haven’t hit anything beyond a few test shots from round the green a demo club.

The Ping ChipR: Bringing Chippers to the Mainstream?

One of the main reasons that chippers are back in the news is the release of the Ping ChipR. Now, I haven’t tried this yet. I am waiting for it to arrive in my local golf shop and I am looking forward to giving it a hit. I am almost certain that it will be a very nice club, made to Ping’s usual high degree of engineering quality. However, reading the surrounding hype, you would think that it has reinvented the game of golf.

Let’s be clear-chippers have been around for a very long time! Ping themselves had a club called the Chip in the 1970s which isn’t visually that dissimilar to their 2022 Chipr. There have obviously been versions that are even older than this. In fact, if you take the time to look in the bags of people ho have been playing the game for a while, especially those who tend to float around the mid handicap range, you will see a fairly wide collection of chippers.

My Experience With Chippers

Maybe it is time to set out my chipping ‘credentials’. I have played various chippers over the last decade. I currently have one in my bag. The photos you can see in this article are of that one, a first generation Cleveland niblick with the famous zip grooves. I will talk a little bit more about why I have this in the bag later one.

I would say that my introduction to chippers would be different to many people. For many (most?) golfers, it is a desperation measure because they are struggling around the greens. Without saying my short game is worthy of Phil Mickelson, this wasn’t my main reason for trying out a niblick (a 42 degree one first of all). For me, it was for the same reason I try out so many different things. I love golf, especially equipment, and I want to see try things out myself. 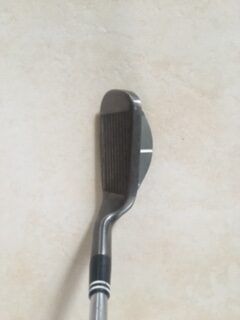 This is why, as a solid iron player, I have had four hybrids including a seven hybrid, in the bag. This is why I have tried playing a very short driver, extremely heavy-headed irons, or even single length irons. Trying this stuff out is fun. This was certainly my experience with the Cleveland niblick range.

In fact, I would say that the standard bump and run from off the green was the shot I played least with my chippers! And yes, you did read that right, I said chippers, plural. I actually had four of these in the bag at one point because I enjoyed using them so much. I am currently thinking of adding a second one to my bag now too.

The ones I used were the Cleveland niblicks like the one I currently have. I really liked these because they came in four different lofts, 37,42,49,56 and all did different things. For example, I used the 37 quite a lot on full shots where it gave me something like 130-140 yards on a full swing. I used it off the tee on short par threes, hitting into greens, blasting out from under the trees or from tricky lies, the list goes on.

Likewise, the 49 was great for those tricky 60-100 yard shots where I would have to dose a half swing with a wedge, something that I am currently finding difficult. In fact, Cleveland advertised these clubs as short game hybrids, and in my experience, this was spot on. Most of the reviews from the time (2008/09) highlighted the versatility they brought to the game.

They had a cult following at the time and yet there were still far too many of the inevitable ‘why don’t you jut use a nine iron?’ comments from people who look down their noses at this sort of club.

This is a shame for many reasons. Firstly, it shows ignorance as to just what these clubs offer compared to an iron. They have a few characteristics that are just going to make life easier for most of us. The most obvious of these is the extremely wide sole.

Generally, I don’t like a particular wide-soled iron. In fact, I do have far more of a penchant for butter knives in my irons. However, I really don’t mind a fat sole in a chipper because, well, it is the whole point of this sort of club after all. This fat sole really helps with both fat and thin shots. If you do get the ground a bit too early behind the ball, the sole will generally glide across the turf rather than digging in. And if you are a bit ‘clean’ in your contact, the weight down low in the sole will still give you a far better result than you deserve, certainly avoiding the thin across the green.

A Shorter Shaft and an Upright Lie

The other thing that just doesn’t make a lot of sense for me with the whole ‘just use a nine iron’ argument is why would you bother? I mean, sure, you can adapt things for all sorts of purposes. I mean, I have watched Bear Grylls filtering water through a sock too! I am 100% sure this wouldn’t be his first choice water filter at home!

As most readers will know, I love minimalist golf and when you have only got 5 clubs in the bag, you need to find ways of playing shots without having the perfect club choice. This is part of the fun. However, not many people reading this are actually looking to play golf in that way. If you can half 14 clubs in the bag, you DO have space for a chipper. That 3 iron you carry is just taking up space. Do you need a 64 degree wedge or even two fairway woods? 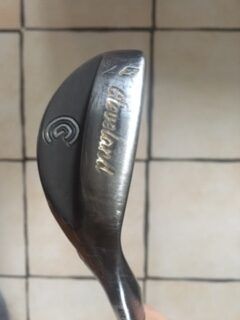 So yes, you can chip with a nine iron and a lot of people hit this shot well. However, it isn’t the easiest way to play it by any means. You have to artificially stand the club up on its toe, grip down and use something with a normal sole width. Certainly possible, but if you are not the most comfortable with this type of shot, why not use a club that doesn’t require any manipulation at all. It already sits more upright. It has a shorter shaft. The weight is already low and spread across a wide sole. It just seems like using the right tool for the purpose.

Ultimately though, it comes back to the idea of enjoying our time on the course. If you get a lot of pleasure out of manipulating your clubs to produce different shots, that is great. It doesn’t mean that this is the case for everyone and there are, unfortunately, many golfers who will stop playing because they struggle with short game yips. There are others who would get so much more enjoyment out of their golf if they knew they had a better chance of getting up and down and their scores would certainly be better.

The sort of golf snobbery which is sees the ‘better’ player looking down on any golfer who isn’t using traditional wedges is just madness. In fact, golf must be the only sport where is seen as being a good idea to use something that makes the game harder! In fact, it is worse than this because virtually nobody would use an old driver with a tiny head instead of a modern 460cc one and yet the short game equivalent is often frowned upon.

I think chippers are actually fun even for the golfer who isn’t really in trouble around the greens and as I mentioned previously, a lot of this fun comes from the variety of shots you can hit. My niblick 37 in the photos really is good for all sorts of situations. If you are a good golfer, you might be surprised just what you can do with it. In fact, I have a fun challenge that you might like to try.

See if you can get your hands on one of these clubs. Use it from tee to green over a few holes and see just what sort of shots you can play. I have done this a few times and it is a fun experience. Here is an example from my course.

I tend to do this off the yellow tees rather than the white (back) tees. This is just because, as much as I like the chipper, it is still limited in some ways, one of these being a forced carry over water/rough off the tee.

Playing with Just a Chipper

The first hole is a 400 yard par 4 from these tees. With my 37 degree chipper, I can hit this green comfortably with three full chipper shorts and it is actually quite easy to do. I have even pared the hole like this (including a putt with chipper) the day after making a triple bogey in competition with a full set of clubs on the same hole!

The second hole is a par 5 of around 500 yards. Hitting the chipper certainly costs distance but it allows me to hit into a narrow part of the fairway on a second shot without worrying about out of bounds for example. Normally from the back tees, my second shot will go past this bottleneck, but if I don’t get the line right, I can find myself in trouble. This par 5 becomes four comfortable swings with a chipper. If I do find myself in trouble in the trees, well I have the perfect club for blasting out back onto the fairway!

The next, a par three, is not far off a full, hard chipper swing. After this is a par four which would be two full swings with the chipper then a 100 yard bump and run.

I am obviously not saying that this is the only way to play, nor even the best. I do like it because it shows that a chipper doesn’t have to be a sort of crutch when the chipping yips strike. For me currently, it is the easiest way to hit that 80 yard pitch which has become a problem. For someone else, it is perfect for bunting the ball forward as a lay up on a par five. Maybe someone else will have it as there get out of trouble club when they are off the fairway. It is also great from fairway bunkers when you need to get the ball moving a decent distance rather than hit a traditional flop shot.

Of course, it could be something that just isn’t on your radar at all and that is fine too. Just don’t be one of the judgmental crowd looking down on the guy who is making smart choices so that he can enjoy his time on the course.