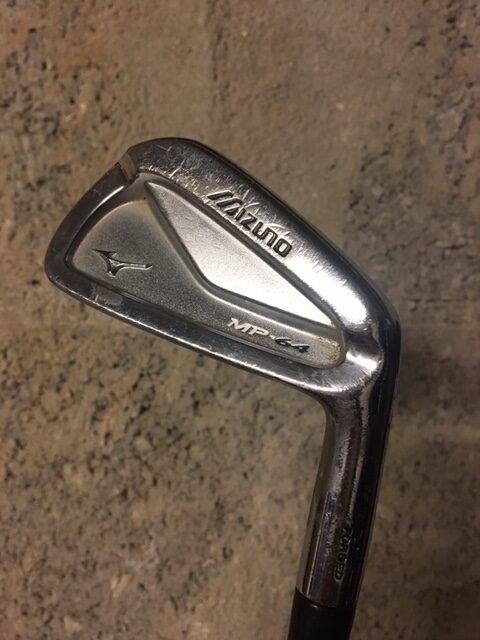 I have a lovely 4 iron. As you can see in the photo, it is a Mizuno mp 64, in my (completely unbiased of course) opinion, it is one of the most beautiful clubs ever made. It isn’t a blade, but it sleek and if you are into that sort of metaphor, feels like butter (although what the hell butter has to do with golf has never been clear to me.) I have hit some (not lots, but some) extremely satisfying shots with this club and the feeling of one that comes out of the middle is a pure joy. However, this club spends the best part of its time in the back up bag. Why is this and are the any lessons for the rest of the golfing population in this choice?

Is the 4 Iron a Dying Breed?

Of course, the real question is whether the four iron has a place in the bag for most of us. The short answer is, of course, it depends, but the slightly longer one is it depends but probably not, at least not your set four iron.

Traditionally, iron sets were sold as 3 to pitching wedge. Actually, if you look at little bit further back, most golfers would have a two or even one iron in the bag but you have to be over millennial age to remember those days. People bought irons and those irons included a 3 and 4, no questions asked.

The arrival of the hybrid iron a couple of decades ago was the first nail in the coffin of these sets. It took some time for them to be accepted as a genuine useful club for all of us rather than simply ‘old man sticks’ or ‘clubs for women’ but not hybrids are a common and helpful addition to most golf bags.

The problem was that these clubs were there to replace the long irons. For a while, companies got away with selling us a set three iron and then a separate hybrid but after a bit, golfers rightly stopped swallowing this blatantly commercial move. It became too common to buy irons sets as 4-px and more recently even 5 or 6 to wedge. Companies began to sell combo sets that had hybrid irons as part of the set instead of those harder to hit longer irons. We have even had the arrival of the all hybrid set which is a real advance for a certain section of the golfing public.

so now the pendulum has swung in the other direction and it might actually be more common to find something other than the set 4-iron in many bags, whether that be a hybrid, a driving iron or at the very least, a chunkier game improvement 4 iron.

Of course, this is the key. A four iron is, like every other club in the bag, a tool for doing a job. This job could be getting in play on a tight par three, hitting a long second shot on a par four or five or hitting a green on a longer par three. And this is the key. Rather than wondering if we should be playing a four iron or not, we should be thinking about what we need this club to do.

For example, if you are hitting this mainly of the tee, you might actually prefer a true 4 iron. Unless it is a real blade butter knife, it really might not be that tough to hit. If you swing the club at a reasonable speed, you might not want a hybrid or SGI iron that is made to shoot up in the air. In fact, it might hurt your game, leaving you short on distance.

However, if you are someone who will be hitting a fairway off the tee for safety or needs that pop from a hybrid to get height on the ball, a standard four iron is a useless club in your bag. Let’s be honest here, this is (or should be) most of the golfing population. I swing my 7 iron at perhaps 87/88 miles an hour I would guess. Sore shoulders and back mean that it is probably less than that quite often and certainly less than that as I head towards the end of 18 holes.

I can hit a 4 iron off the tee. I can even hit my beloved Mizuno off the tee. In fact, if you put my in a simulator and gave me most standard four irons to hit, I am probably doing fine. On the course, after a couple of hours of golf, I am no longer convinced this is the case. I think I might need a hybrid and in fact this is why my four iron is sitting in the garage and a hybrid is taking up its slot in the gamer bag.

This is before we even start thinking about when I might need this sort of distance off the fairway. Let’s say that I am sitting 200 yards out. Perfect four iron distance maybe. What if I have already played 15 holes carrying my bag. I know that when I make a great swing and really crush that ball, my 4 iron is getting there but is it happening now? Maybe, but the odds aren’t good.

Instead of this, I pull the four hybrid out. Suddenly, I don’t need to crush it. I know that a solid (but not smashing it) swing will do the job. My odds of hitting this shot are a hell of a lot better.

Look, I am not suggesting that the 4-iron is really a dodo. It is still being used in many bags at all levels with plenty of success. Maybe it a question of moderation. Perhaps this four iron will still work, but would be better with a graphite shaft. Maybe a four iron is a great club for you but not that blade or cavity you have in the rest of the bag. Maybe you should look at a hybrid instead? Maybe you really don’t need anything at all, because it isn’t going to be going any further than a five iron at your clubhead speed anyway.