The Funniest Golfers in the Game

As a golfer, I am always surprised by the image non-golfers have of the sport. Boring, old-man’s game, upper-class and so on. I understand perfectly why these images exist, it is just that they don’t fit with 99% of what goes on in golf today. One of the most wrong, I would say, is that golfers are humourless individuals. In fact, I would say this is the complete opposite of the truth. I have played a lot of sports and the funniest golfers in the game are up there on a par with any sportsmen I have ever met.

I am not talking about the guy that says ‘one’ as your ball topples forward off the tee on the first. I mean, we are all that gut, right? It is a sort of Pavlov’s dog thing. I just can’t resist saying it really. The ball falls, I say one. No, I am talking about some of the genuine comedy that happens out on the course and some of the golfers over the history of the game who have brightened up a round with some comedy gold.

There are of course a few golfers who have the reputation of being…well let’s just say less than pleasant company on the course. As tempting as it might be to name and shame, there are at least a couple of things that hold me back. Firstly, I don’t know any of these guys personally. You do hear rumours, chat on golf forums and so on, but the only real vision we get of them is through the prism of golf coverage and social media. This is a fairly tinted lens so I would rather not simply repeat negative opinions that may or may not correspond to reality and can be found online easily enough anyway.

The other thing is the fact that golf is a very high-pressure game. I am generally quite calm and on an even keel but, like anyone, if you get me on the wrong day you would probably think “what a …..!” Who knows, maybe you are right? The point being, we all have our ups and downs. The fact that a golfer was less than charming to someone whilst under enormous pressure trying to make his living does seem like a good reason to slate him. Better to concentrate on the good guys.

Lee Trevino was known as being the life and soul of the party, even on the course. There are many clips of his quick wit online, including this one. He said that he used interaction with the gallery as a way to keep motivated and in the game and judging by his career stats and huge popularity worldwide, it seems to have worked. The famous “one iron in a storm’ quote is attributed to him.

Phil Mickelson has a mixed reputation with the golfing public, but he is a genuinely quick-witted guy as attested by his quip cutting off the announcer on the tee with Tiger Woods in this video here. He has also served up some absolute comedy gold both in his videos for Callaway and in the occasional short videos on his own channel (look for his calf training stuff for example).

If you are looking for the some of the funniest lines in golf, David Feherty might well be top of the list. His on-course commentary is hilarious as well as being on-point in terms on golf knowledge. He has certainly been close to the edge on quite a few occasions and probably beyond it once or twice too, but he is the antithesis of the bland “say nothing” mentality that is so common in professional sport today.

I always found that listening to him whether in commentary on his own show was a really enjoyable experience with a mix of insight and sharp one-liners.

I have decided to group these tow together not just for their nationality but also because they both have the ability to tell a funny story. Whoever said that Scandinavians in general lack humour has obviously never met Henrik Stensen or Jonas Blixt. True, Stensen might look at little bit severe and has an imposing physique, but he is a golfer I would love to play a round of golf with. He has a brilliant deadpan delivery and sharp wit. Jonas Blixt might be slightly less well-known but some of the stuff him comes out with in press conferences is fantastic. His wit is often turned against himself in a self-deprecating manner and is well worth a look.

Eddie Pepperell falls firmly into the category “caustic wit”. If you follow any golfers on social media, Pepperell’s twitter feed is an absolute delight. He plays on the grumpy, egotistical golfer image to perfection. Don’t believe me? Enjoy this from his twitter.

This doesn’t go to any golfer in particular, but I love what some of the professional tours are doing. This video from the DP world tour is one of the funniest golf things I have seen. The fictional European Tour anger management group is brilliant. It also shows that some of the biggest names in the game don’t actually take themselves too seriously all the time. Enjoy! 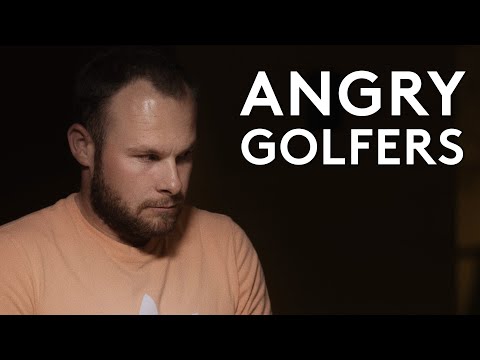