A swing is a swing, at least in theory, but anyone who has spent any time around golfers can see an immediate difference between a beginner and a better player, just by watching them take a swing. And yet there are some very solid golfers who have swings that look like someone who should be playing off 30. This got me thinking: what exactly is a beginners golf swing and should someone in the early stage of their golfing journey swing in a particular way in order to make the best progress? 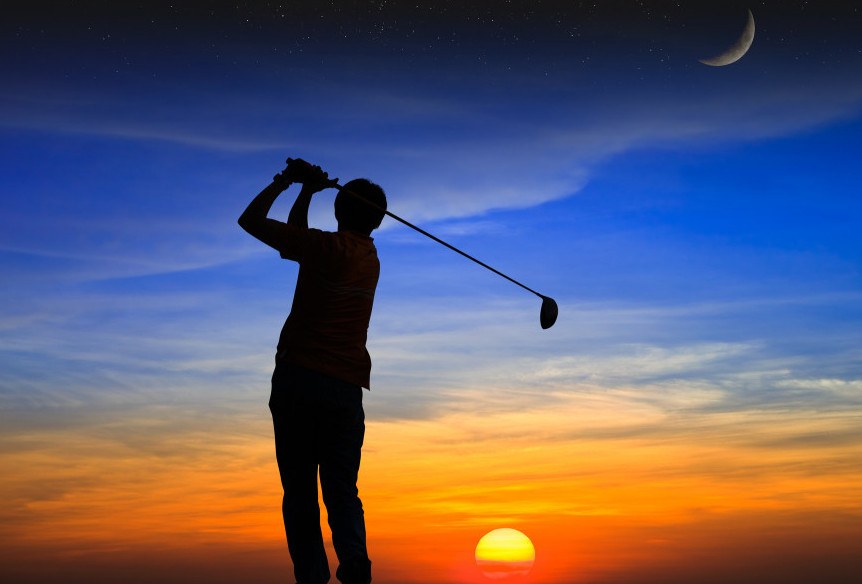 One of the (many) things I like about golf is that there is no one way to play the game. There are low ball hitters, high ball hitters, people playing with a fade, others a draw, fantastic long iron strikers, golfers with a bag full of hybrids, and so on. Despite the popular image of a beautifully aesthetic swing hitting a high baby draw, I don’t think there is actually much of a correlation between any particular style of play and what it says on the card.

A good golfer knows what he has (and hasn’t) got and uses those tools to play his way around the course using his or her strengths and hiding his weaknesses. I wouldn’t put myself in the ‘great golfer ‘category but I am a reasonably solid golfer compared to average. I do some things really well and others horribly. For example, I am, modestly, a pretty solid iron player. I hit my irons long, high and with a repeatable shape. However, I am hot and cold with a driver and frankly occasionally embarrassing with a wedge!

Given this, I might choose to hit iron/iron rather than driver/wedge. For another player, the truth could actually be the complete opposite. The point is, it doesn’t matter as long as you know.

A beginner won’t have either this sort of knowledge or even these strengths and weaknesses. After all, the definition of a beginner might be someone who only has weaknesses because the only way is up. Even then, there are exceptions of course. Someone who comes to golf from a racket sport like tennis might find they have much better ball striking than average the first time they pick up a club.

So the real question is, what can someone starting out do in order to be as successful as possible as quickly as possible, and especially, is there a beginners golf swing that will make this transition easier and/or quicker?

This is actually a tricky subject because it leads is to the path of ‘finding the perfect swing.’ I think this is not only impossible, but actually more than a waste of time. Too many golfers play ‘golf swing’ rather than golf. They become obsessed with hitting certain positions or how the swing looks in the mirror. Even if you have hours a day to practice and a personal swing coach this probably isn’t great, but for the average guy or girl it can spell disaster. Anything we may have in terms of a repeatable swing and a decent game quickly falls apart and the pleasure tends to disappear to be replaced by the notion of work (as in ‘I’m working on my swing.’)

This being said, there are, in my opinion, some fundamentals that should be high on the list and that will work with whatever swing you/your instructor is developing.

I am not a golf instructor nor, as the saying goes, have I played one on TV. I am a student of the game and have discussed this quite a bit with some teachers as well as some very good players. The ideas might have been expressed a little differently, but it tends to come down to three things: grip, posture and weight. What exactly do I mean by these three terms?

Grip is both obvious and actually not as rigidly etched in stone as some tend to think. I have personally gone from a very strong grip to a very weak grip and am currently transitioning back to a slightly stronger grip. I think you can hit the ball very well with various grips, whether strong or weak, ten finger or overlapping. Some people have even made it to the highest level playing with their hands the opposite way around! Don’t believe me? Try Josh Broadaway for example, but he isn’t the only example (especially around the green.)

So why is grip so important if “any” grip will do? Well, in much the same way as the tyres on your car are the only point of contact between car and road, so your grip connects you to the club. If it isn’t comfortable and effective, the rest doesn’t matter. The grip really only varies depending on the swing. I weakened my grip because my swing can produce an over draw/hook and I wanted a way to make this less likely. Currently, I am strengthening my grip to get rid of the occasional wafty, high right shot.

As a beginner, the grip needs to make you confident that you will strike the ball as well as possible. You don’t need to look for something outrageous here either. The very first lesson, any reputable instructor is going to see how you naturally hold the club, show you the various options and let you find what works best for you. Getting the grip sorted is the first step on the journey to a real golf swing.

The next idea I like is to do with posture. You will often hear advice to adopt an athletic posture or stance. Again, there are great golfers who play with a stance that looks more like a hunchback than a high-level athlete, but they tend to be the exception rather than the rule. Getting into a comfortable stance is important and then have a posture that is slightly bent at the hips (what I would call athletic) gives most people the best chance of powerful and pain-free golf.

Of course, this is when equipment also become important. If you are as tall as me as a beginner, you might need to be a little bit careful. Generally, the first clubs you hit will be some standard length ones from the club. This might not encourage you to stand tall and really use those long levers and could potentially lead to back issues don the road. If possible, try to borrow something longer if you are very tall (and shorter if you are well under average height.)

Once you are behind the ball with a solid grip on the club and standing in a good position, there is nothing stopping you making a good swing and hitting the ball well. Of course, this is going to take practice, but in my opinion, a couple of potential roadblocks to swift progress have already been taken care of. No mention of swing place, getting to parallel, club face rotation etc. These are almost certainly important things, but they are something for an instructor to look at as you get better. In fact, the last thing that is going to be important regardless of how you actually swing the club is weight distribution and movement.

There are different schools of thought on this, from stack and tilt to swaying away and coming back. One constant seems to be that weight should be on the front foot far more than the back at impact and probably still moving towards that front side and beyond.

Once more, people who have played a “hitting” sport tend to get this automatically. These sports depend on getting through the ball. For others, this is difficult. It is really important for making rapid progress though because it is key to the grail of hitting ball then turf and making that divot after the ball. In fact, if there is one thing that is truly common to good golfers, it is that they will do this each and every time and someone who does this is never a bad ball striker and probably a very good golfer. If all everyone concentrated on this is at the start, I think the journey from a to b would be a fair bit shorter.

So there you have it. There are many ways to skin a cat and there is no universal swing truth. Flat, upright, long or short, all can and do produce good results. An effective beginners golf swing will get grip and posture sorted and then let the golfer work on weight transfer to the front side rather than worrying about any details and progress should be faster than is often the case for many.