With the current year-round version of golf, it is hard to say when one season ends and another begins, but now seems like as good a time as any to take stock of what has happened in 2017. I don’t want to run through a play-by-play of everything from this year (I will only forget half of it anyway!) but I have been thinking quite a lot about one question:

Of course, there is going to be a lot of personal opinion in this choice. We all have our favourites after all. And really, I have only been thinking about men’s golf which is crazy when you consider the amount of talent on the women’s tours. As one reader (Cliff) rightly pointed out, Lexi Thompson and Lydia Ko should be in the discussion for a start.

I thought the obvious place to start would be the major winners. As a quick reminder, the majors turned out like this in 2017:

Whilst any of those four are certainly part of the cream of the crop, it sort of makes you think about the names that don’t appear on that list. what about Rory McIlroy, for starters? sure, he has had his troubles on the greens and has apparently been playing through various injuries for most of the year, but is anyone seriously saying that he isn’t near the top of the talent heap?

Let’s get back to the four names above. Sergio has had the unfortunate ‘best player not to win a major’ tag for a while so not that he has that monkey off his back, is he simply the best? After all, he is a fantastic ballstriker and with better performance on the green, he probably would have been off that list a lot sooner too.

But much as I like Sergio, should he really be in the same bracket as Speith? I mean, if anyone has shown that they possess the perfect golf temperament, it might be Speith. After his masters blow up in 2016, many were questioning his mental fortitude and ability to bounce back. Well, I humbly submit exhibit A:

Not mentally strong? Really? And you would be a in a very small group to suggest that Speith isn’t one of the best putters in the game and possibly the best clutch putter since Tiger.

The one guy on that list who most people might ignore is Brooks Koepka. I mean, sure, he won a major, but he isn’t in the same league as Spieth, is he?

Just to play devil’s advocate, let’s not forget that he tied the US Open scoring record with 16 under par and won by four strokes without ever looking in danger. Many will say that the US Open is the toughest test of golf all year as well.

That leave’s Justin Thomas and many are predicting that he could be the guy to dominate over the next few years. He hits it miles without being the biggest guy out there by a long stretch, has a great short game and seems to have the right mental attitude for the bigger occasions.

What About the Rest?

Of course, there is really no need to limit the choice to the major winners, is there? In any given year, a maximum of 4 players are going to be able to hold that honour and that is going to leave a lot of really good golfers off the list.

It might seem a while ago now, but what about Hideki Matsuyama’s start to the year? When he is on, he strikes the ball just about as well as anyone. The same could be said for Sergio or even someone like Justin Rose, who could well have become part of that select club of multiple major winners this year too.

Jason Day might have had a poor year by his world number one standards, but can anyone say he won’t be back next year? And finally, Dustin Johnson. Nobody in golf hits it longer and straighter and this means he can play golf in a different way to even the world’s best. Given how good his wedge game is now, this can actually make him close to unbeatable now and again because he can hit lines that just aren’t there for the rest of the field. His playoff victory against Spieth at the Northern Trust would be the perfect example. 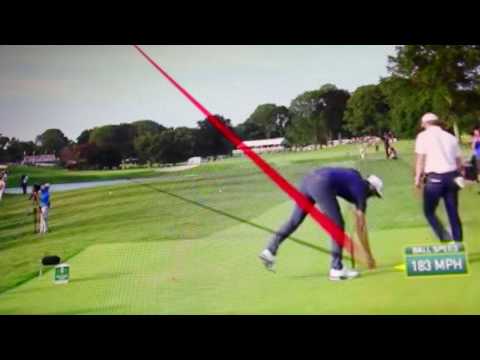 The shot tracers there show two guys playing basically different holes. And don’t be fooled into drinking the cool aid that Spieth is simply a short knocker. Spieth hits it as far as most on the tour, regardless of  what you may have read on golfwrx!

Is There a Best Player in the World?

This is starting to seem like a bit of a cop out. Sort of “they are all great players and we shouldn’t try to pick just one.”

Whilst I believe that any of the guys we see playing golf on the tv is an amazingly talented individual, I do think that two golfers are currently a cut above the rest and they are Spieth and Justin Thomas.

Whilst both are hugely talented and seeing how far a smaller guy like Thomas hits it is just incredible, it isn’t just talent that sets them apart in my mind. They both just have that ability to win and a huge amount of mental strength that makes them really tough to beat.

Spieth already has something about him that makes him at least a little bit feared by the rest of the field and Thomas is a couple of wins in the next few months from carrying the same aura.

The really amazing thing is how young these guys are too, both just 24. Predicting the future is a notoriously tough business, but anyone care to bet against a handful or two of majors for these two over the next decade? For me, golf has never had such a deep talent pool. I wonder what this ‘youngster’ who has been posting his swing on social media ? 🙂