I should probably start this article by saying that I really am not the best role model around the greens! I am capable of fatting and thinning with the best of them and am usually happy with a very average result! Any golf tips for chipping that I give should probably be taken with a pinch of salt you might think! Actually, this isn’t completely true for a couple of reasons. Firstly, I am capable of some pretty good stuff in the short game and enjoy the creative aspect of these shots. However, I don’t have the time to spend hours honing my short game which leads to mixed results. This means that I have tried quite a few tips and tricks, some of which have been good, some not so much. 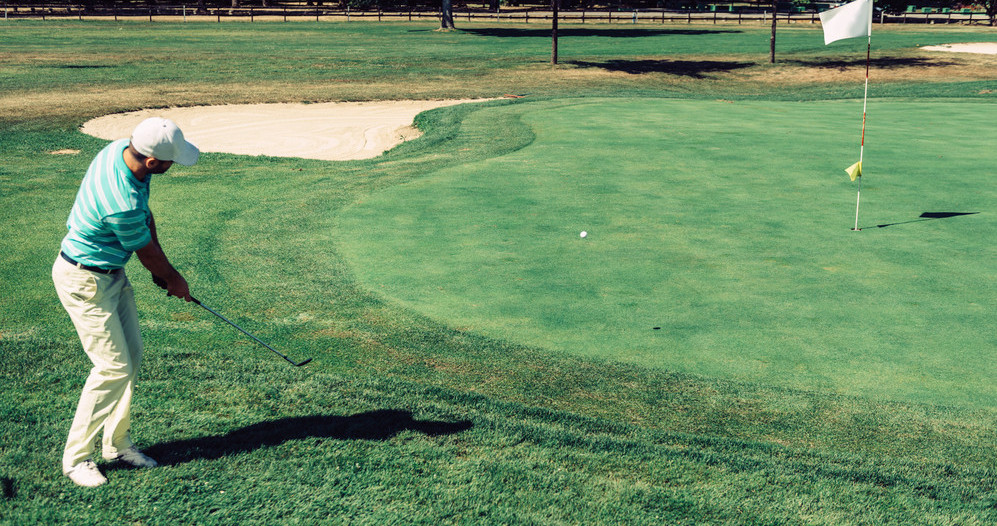 Like anything, getting a really good short game is going to take a lot of practice. The reason why the pros are so good is the amount of time and care they dedicate to chipping and pitching. Unfortunately, not everyone has all this time. So are there any shortcuts? Actually, yes, there are a few tips that will help without taking hours. Obviously, if you can get to the short game area at your local club a few times a week, you will make better progress than someone who only ever plays short game shots on the green. If you have already hit that greenside chip hundreds of times in practice, it is a completely different shot than for someone who hasn’t.

This article will hopefully offer something to everyone. If you have a lot of practice time, this should save you some trial and area and give you things you can work on straight away. Honestly though, I generally fall into the other category of golfer-the guy who only ever chips or pitches when he is on the course playing. This means that any tips for chipping need to be easy to put into practice without hours of trying them out before.

This is quite a common tip and I have actually mentioned it before I think. It is quite self-explanatory. Basically, you set up to the shot and lift the heel of the club off the floor, standing it a little bit more upright. Then hit the shot with more of a putting motion. This will feel a little bit strange but works really well almost from the first shot. Why exactly does it work? Well, it basically takes the fat (and to a lesser extent the thin) out of play. There is less of the club to dig and it is fairly simple to make solid contact.

This isn’t, in my experience, a technique that you can use with all short game shots. It works best with the chip and run, greenside shot. I have actually used it with slightly longer shots, especially when I need to go up and over an obstacle and then have some green to play with. For example, I use it when I find myself the other side of a greenside bunker but not short-sided. The reason why I like it here is because it takes the duff out of the picture and means that my next shot won’t be from in the sand desperately trying to save a double bogey!

Again, this isn’t a particularly rare thing to hear, but it makes a huge difference when chipping. Good chipping is initially about making good contact with the ball. Over such a short distance, getting it even a bit fat or thin can lead to an absolutely horrible result. Getting the weight forward will make good contact far more likely. It makes it harder to flinch or flip at the ball which is another absolute disaster around the green.

This actually works on another level too. When you are confident of making solid contact with the ball, you can actually concentrate on things like pace and direction more. A poor chipper will be generally obsessed with ball/turf strike and avoiding a horrible duff or thinning it across the back. Something which finishes on the green even 15 feet away becomes an acceptable result. when you can really focus in on pace and direction, a bad result might be 5 feet, which is a very makeable put in anyone’s book.

Hitting a flop shot with a 60 degree wedge is fun. It is something I like to do when I am out on my own, or in a friendly round. Often, in these circumstances, it will come off too and I can tell myself that it is really only a small step from me to Phil Mickelson! I encourage everyone to have fun on the course and trying this sort of shot in non-pressure situations is part of the fun of golf.

However, there is no way I am going to take on a flop shot in a serious round unless it really is my only choice. When the pressure is on, getting that perfect strike is going to be far less likely and the downside is potentially enormous. So what is the option? Bump it in there with a 56? whilst there is nothing wrong with this, I think many of us would be better trying to do a fair amount of chipping with an iron. Personally, I like a seven iron but it could be an eight or nine, depending on what you prefer.

This is a really good shot to have in your bag for a few reasons. Firstly, it is very easy to play. It is almost like hitting a put with a bit more loft. Even fairly average golfers should have little difficulty in making solid contact. The second reason is that the potential downside is so small. A miss hit seven iron bump and run is generally on the green and fairly puttable.

If you want proof of this, try this game. Pick a spot just off the green. Not in horrible thick rough, either on the fairway or light rough. Hit ten shots with a seven iron and then hit ten more from the same place with a high lofted wedge, say a 56. I would bet that the best shots from both clubs will be similar, but the worst shots with the seven will be far better than the worst with the wedge. And this is what counts. It is great to hit that flop and stop to a foot, but what are your odds really of pulling this off? I would take a 90% chance of getting it within 5 feet all day long.

The last tip I have is somewhat similar to the previous one. It is worth thinking if you really want to be chipping at all. Most golfers don’t even think about the choice of club or shot as soon as they are near the green. Maybe they already have their highest lofted wedge in their hand as they stroll greenside. I would suggest another approach. in fact, here are three more clubs that you could use and a different way to play the chip shot.

There you have it, a few tips for chipping that have worked out quite well for me. If you have any others or if you have tried some of these, I would love to hear how you got on.