What is the Hardest Hole in Golf?

Golf can be an incredibly unforgiving game. Sometimes, it just doesn’t go your way. A hole that looks like a straightforward par three on the tee can turn into a triple bogey nightmare as your tee shot plugs in that green side pot bunker. Sometimes though, you are in trouble from the start. As you place the ball on the tee, you know that your chances of keeping the scorecard intact are slim to none. These are the “man killer” holes. The hole that makes even the seasoned pro break out in a cold sweat and has the rest of us shaking before we even start the backswing. All of them are solid candidates for the hardest hole in golf.

The 17th At Sawgrass

A par three that is not much more than a flick with a wedge for the modern pro seems like an unusual choice for potentially the toughest hole on golf. The green isn’t huge but there are certainly smaller ones on tour too. Despite all this, the 17th at TPC Sawgrass one is infamous for the damage it can inflict. There are a couple of reasons for this. Firstly, it is an island green. You can’t play for the miss because if you don’t hit the green, you are in the water. If there is any wind at all, club selection becomes a nightmare. Secondly, it is the penultimate hole of a championship course. Imagine stepping up on the tee with a two shot lead and seeing your ball hit the green and spin back into the water! Now think how hard the next shot has become as you hit three off the tee having seen your lead disappear along with your ball?

The Road Hole at St Andrews

The Road hole at St Andrews might actually be one of the most famous holes in golf as well as the most difficult. Once again, this is the penultimate hole on the course and this in itself makes it a potential round wrecker. Next, comes the tee shot. In order to find the fairway, you have to hit the ball over a hotel! OK, not exactly over the top, but you do have to go over the former railway sheds which is now part of the hotel. If you get too greedy, you are out of bounds right or worse, looking for your ball on one of the hotel’s balconies! now that the hole has been lengthened to nearly five hundred yards, you would be facing a long shot into a very tough green guarded by the notorious road hole bunker. And for anything that rolls through the green, you are trying to chip back towards the bunker from the road, or attempting to bounce the ball off the wall back onto the green. No wonder that this particular hole always has one of the highest scoring averages to par when the Open is played.

This one is slightly different in that it is really a gimmick rather than a true golf hole. As a par three of nearly 400 yards, the extreme 19th at the Legend Golf and Safari Resort in South Africa is probably the longest par three in golf. The length itself isn’t actually that surprising when you consider the layout of the hole. The tee shot is from Hanglip Mountain and is only actually accessible by helicopter. Once you hit the tee shot, you will be waiting the best part of a minute for the ball to land and rumour has it that less than 20 people have ever made birdie. The 19th was a late addition to a Championship course and so you can happily lose your ball without it affecting your 18 hole score.

Compared to the 400 yard monster that is the extreme 19th, the Postage Stamp at Royal Troon is a diminutive 123 yards. Barely a flick with an approach wedge for many golfers. This of course is the first problem. If you have never played golf on a windy links course, you might not appreciate just how tricky it is. A hole that is playing as a pitching wedge on one day becomes a hard six or more iron the next. There is no running it up low under the wind either. Five pot bunkers, including the aptly-named Coffin Bunker, guard the tiny green. If you are in one of these, getting out is a problem, never mind getting it close. Rory McIlroy famously took 5 (or was it 6?) shots to get out during one of his practice rounds before the Open a few years ago and Tiger himself managed a triple bogey there after hitting a course record the day before.

The Stadium Hole at Scottsdale

Without bragging, I would be disappointed if I didn’t make par on the 160 yard 16th at Scottsdale. It is, like the majority of the others listed here, a relatively short par three. Compared to the others, it doesn’t seem that tough. no wind howling in from the sea making club choice a lottery. No pot bunkers where your ball might disappear never to be seen again. So what’s the problem?

Well, its nickname of ‘the Coliseum’ should give you a clue. It is one of golf’s most famous stadium holes. Whereas normally there might be a crowd of people silently standing around the tee as professional tee off during a tournament, when you are on the tee at the 16th, you can count on 20000 screaming fans and a party atmosphere in the grandstands that completely surround the hole. Yes, I think I could par this one if I played an empty course with friends but I am not even sure I could make contact with the ball in tournament conditions. Don’t believe me? Take a look and then get back to me;) 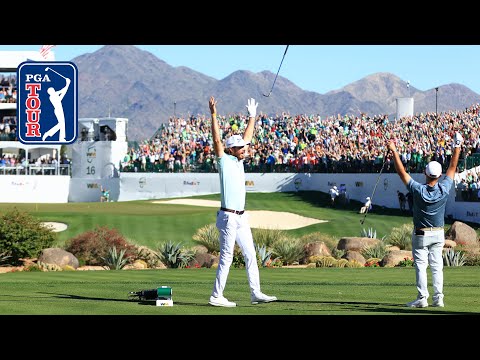 The old ‘what is the hardest hole’ argument is one with no real answer of course. There are so many courses and so many great holes. Some of us might worry more about a monster par five, others about finding a deep bunker. These five holes show that golf is a game of almost infinite variation where the true test can come in many different forms. If you have had the chance to play any of these holes or can think of others that might be worth their place on the list, I would love to hear from you in the comments.

previousWhat is the Best Way to Play a Par Five?
nextGetting Out of a Bunker