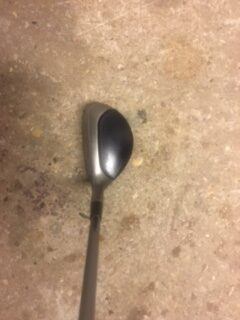 You pick that lovely forgiving hybrid out of the bag, set up behind the ball with visions of seeing it fly high and handsome to the green, try to block out that new swing thought you picked up from a guy on YouTube, take the club back and through…..and see the ball scuttle 80 yards down the fairway scattering wildlife and crushing daisies! What went wrong? Well, maybe it is time for you to stop topping hybrids!

Are Hybrids Really Hard to Hit?

I will admit that I struggled with hybrids for a long time. I would still call myself an iron player and I am, sadly, old enough to remember a time when a long club meant a 3 or 2 iron and then a fairway wood, which was actually made of wood or at best a minuscule fairway metal!

My first attempts with hybrids really didn’t do much for me. The much-vaunted forgiveness didn’t stop me hitting all sorts of horrific shots with ball striking, something that had never really been a problem, suddenly disappearing out of the window. At best, I would get the ball high and handsome but inevitably hooking. More often than not though, I was topping the ball. Not every time, but far more often that I might with any other club in the bag.

I wasn’t immune to the occasional top, but it wasn’t exactly my common miss but it did seem to be a real problem with hybrids. Not to worry, I thought. I am just one of those golfers that aren’t suited to hybrids. Long irons it is for me.

That is all well and good, but after a bit I had to accept that hitting a three iron or even a four iron really isn’t that easy, especially as swing speed drops off. Seeing people, even slower swingers, hitting these rescue clubs high and far became a common siight on the course.  Maybe it was time to give them another try?

The Problem with Hybrids

Just what is it that makes us top hybrids? Well, it is essentially a visual problem. The key is to think of hybrids as being like irons. Unfortunately, many of us see (or in my case saw) them as fairway woods. That head shape just reminds us of a five wood. Hitting fairway woods well is generally about using a sweeping swing (unless you are Sergio Garcia taking a divot with your three wood)

A great iron swing is really just the opposite. We should be hitting down into the ball. With a long iron, this attack angle isn’t going to be huge but should still be there. For me, I would set the hybrid behind the ball and immediately I was in “fairway wood mode”. I hit fairway woods fine generally but this felt like I was hitting a fairway that was too short. This was essentially what I was trying to do because I was attempting to play a shot using a club that might be 40 inches or less and quite upright instead of perhaps 43 inches and much flatter in lie angle.

The result more often than not would be a top and if I did make decent contact I was sending it left because the lie angle was far more upright than I needed for a five wood swing.

So the key is really thinking of your hybrids as being like a very forgiving iron. In fact, this is exactly what these clubs are designed to be. Ball position should reflect this. You don’t want to be trying to hit it off your left heel (for a right-handed golfer) like you would with a driver. Of course, it isn’t generally going to be back in your stance although this shot is definitely possible if you want to punch a hybrid to go under trees or whatever. Just set up with the ball wherever it would be for the corresponding iron. If you use something like a high-lofted hybrid (and many of us should at least give this a try), play it like your 6 or 7 iron or whatever.

The next thing is the swing itself. Overcoming the desire to sweep is the key. Don’t necessarily think that you need to be taking huge divots, but it is probably useful to see at least some trace of the club making contact with the ground after the ball. Hybrid clubs are designed not to dig anyway so generally the thick sole will glide across the ground.

One other thing that can work for some people is shaft choice. This definitely made a difference for me. a lot of golfers will play heavier steel shafts in their irons and then switch to something lighter in graphite for their hybrids. This transition can be hard and actually pushes us to group hybrids with woods. If you are struggling to hit your rescue like an iron, it is worth playing around with the same shaft as your irons.

For example, when I was attempting to adopt a hybrid, I had an iron set with fairly heavy iron shafts in. If memory serves, they were project x 6.0 at the time which must weigh around 125g I would think. I was struggling with a four hybrid that had a 65g graphite shaft. Nothing wrong with this but it was just too much of a jump at that time. I got hold of a mizuno fli hi hybrid with the same project x steel shaft and suddenly I felt like I could hit it!

This shouldn’t have surprised me and really I should have tried it much sooner. The club felt like the rest of my irons, more or fewer and swinging it the same was easy. I actually spent a bit of time with a 3,5,6 and even 7 hybrid like this. They just became very easy to hit irons.

This allowed me to transition into perhaps more standard hybrid set-ups. I probably wouldn’t put heavy steel in my hybrids today and in fact am toying with the idea of going full graphite throughout the bag but at the time it worked perfectly and could be a smart move for anyone else who is struggling to make this transition too.